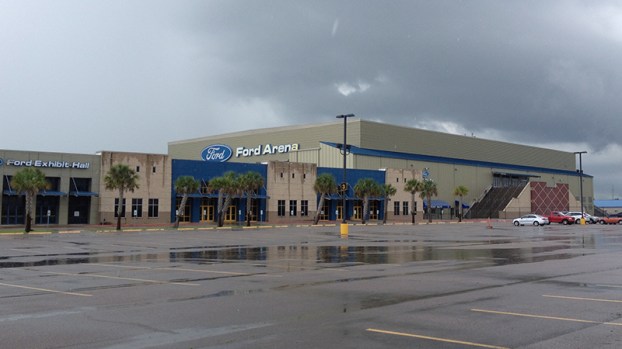 BEAUMONT — Perseverance may have paid off for Renaissance Development in its pitch to purchase Ford Park Entertainment Complex.

And while its bid was several million dollars less than the required minimum of $29.8 million, it was the only bid — both times the complex was put on the market.

Kevin Johnson, representative of Renaissance, was on hand to field questions.

The bid will officially be awarded at the next meeting, Nov. 17, and the group has 10 days to put up the 2 percent earnest money, which is non-refundable.

After this, there is a 60-day window to close on the sale, sign all contracts and pay the full amount for the entertainment complex.

Commissioner Brent Weaver lobbed numerous questions to county staff wanting to make sure the sale is in the best interest of the citizens of Jefferson County. He wanted to make sure “the keys” wouldn’t be handed over to the new owners until the payment is made and to see if the payment would be in cash and not some sort of financing arrangement.

The county is also concerned the new owners would honor contracts with vendors and groups such as the Young Men’s Business League (YMBL), which puts on the South Texas State Fair at Ford Park.

Chris Colletti with YMBL recalled when Ford Park was just a vision in 1997 and YMBL was brought on board because it wanted to make a difference.

Colletti said he feels like county auditor Patrick Swain in regards to the sale — show me the money.

Johnson assured YMBL the agreement would be honored.

“As far as my opinion, I want what’s best for Jefferson County,” Colletti said.

The sale of the property will save taxpayers upward of $7 million in debt service and maintenance, commissioners said.

Ford Park Entertainment Complex is located on 221 acres and includes an arena, exhibit hall, pavilion, midway and fields on Intestate 10, according its website.

The propositions did not list a location for the activities.

Johnson said the group would make a significant impact on the workforce with 400 direct and indirect jobs. Work will be done in phases and could include construction of a hotel, addition of concessions for the ball fields and more.