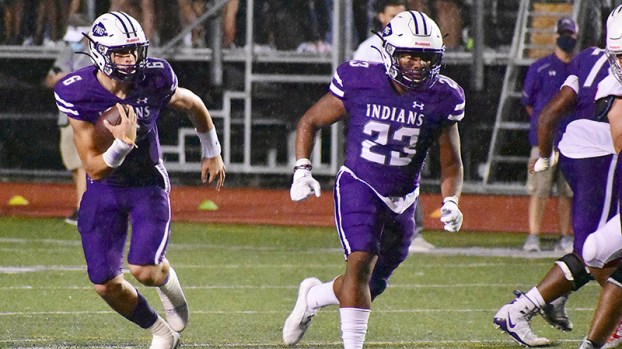 PORT NECHES — With The Bum Phillips Bowl on the line, down a score with time dwindling, the Port Neches-Groves Indians drew up a play to one of their most reliable players in junior halfback Daylon Bergeron for a game-winning touchdown to beat rival Nederland 22-21.

“I was ready for it,” he said. “I’m not the type to be nervous. I welcome the pressure. Was excited. I ran straight to the student section. It was a big game for everybody here, and I was glad I could do that. It was surreal. It was a crazy moment and probably one of the best feelings I ever felt.”

“He earns our confidence and his teammates’ confidence in practice every week,” Faircloth said. “He is a great practice player. He has great energy every day and is consistent. He is also intelligent. When you are all of those things, it earns everyone’s confidence.”

The halfback position was being phased out of football with the growing popularity of the spread offense. However, the position has made a bit of a comeback as teams use versatile tight ends as fullbacks, making them H-backs.

“He is a complete player,” he said. “He is fast and athletic. He has great hands and is very physical. That position really encapsulates all of football. You get to block, run and catch it. He’s so versatile. We can line him up anywhere we want to and it doesn’t change the play call or anything.”

He said using Bergeron in the game plan is “fun” because of how he can create matchup issues for opposing defenses.

Bergeron described his style of play as aggressive, but smart and he welcomes contact.

All of these traits can be found in players like Kansas City Chiefs tight end Travis Kelce and San Francisco 49ers tight end George Kittle, whom the junior looks up to.

“I like to get the ball, but I can also do the dirty work down in the trenches,” Bergeron said.

He hopes his leadership is one of his best qualities.

“I want to be someone they can depend on,” he said. “I just want to be there for my teammates.”

When he is not playing football, Bergeron is either studying or playing the Madden football video game, at which he said none of his teammates can defeat him.

The junior comes from a true Southeast Texas football family. His brother, Donovan Bergeron, played defensive back for the Indians last year.

During a preseason scrimmage against Nederland, Memorial sophomore linebacker Darrell Thornton had his “Welcome to varsity” moment. “I’m not going... read more