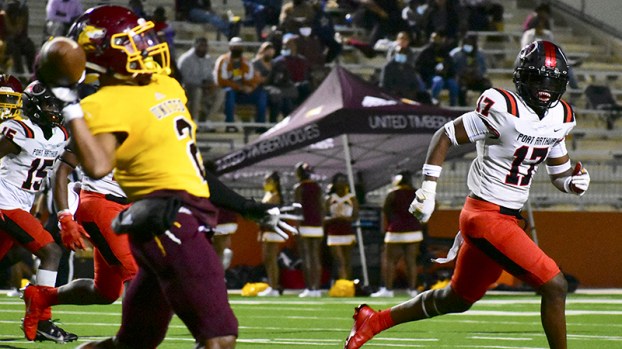 During a preseason scrimmage against Nederland, Memorial sophomore linebacker Darrell Thornton had his “Welcome to varsity” moment.

“I’m not going to lie, my first time on varsity, I got ran over,” Thornton said. “I think it was a running back from Nederland. After that, I wasn’t going to let that happen anymore.”

Ever since, he has been a key contributor to the district’s most dominant defense.

“I’m young, but I feel like I know a lot about the game,” Thornton said. “I feel like I can go out, play well and be a big part of the team.”

Head coach Brian Morgan said the sophomore is a “really intelligent guy,” and the thing coaches like most about him is he doesn’t make the same mistake twice.

“You can tell him one time and it is fixed,” Morgan said. “If we tell him there is something that we need him to do better, he goes and works on it and gets it. That is something that you usually get from older guys but not from sophomores.”

Morgan met Thornton when he was in the eighth grade.

“He was a big ol’ kid playing 7-on-7,” he said. “He was playing free safety and he told me he was a safety. I told him he was too big to be playing safety. He is a really athletic linebacker. He was always a bigger kid, but he was athletic enough. He is only going to get better as he gets more offseason and track time in him.”

Morgan said Thornton fits in well with a crop of young talent on the Titans.

During last week’s 20-0 shutout against Beaumont United, the defense was tasked with stopping quarterback Bradley Thomas, who averaged more than 100 yards per game rushing heading into the contest. Thornton and the rest of the Titans’ front seven held Thomas to 25 yards on seven carries.

“This past week, we told him that he has to do a better job of getting off blockers,” Morgan said. “You see on film over and over again that he is doing it. He really understands that.”

Thornton said the defense’s success comes from playing as one. He also sees players like Jordon Thomas and Jaylon Guilbeau, whom both committed to the University of Texas, and tries to learn from them.

“We play hard and physical,” he said. “I really look up to them because they are the older guys. I want to be in the spot they are at. They are good players.”

Morgan said Thornton could be that caliber of player if he continues to work hard.

“It’s hard to explain,” Morgan said. “You see it in football at different levels. Some of those guys just have a knack for getting to the ball. He’s an athletic guy. He knows where to be. He caught an interception that they ruled hit the ground. He recovers fumbles on kickoff. It’s not luck. He’s where he needs to be and running to the ball. He has multiple sacks by playing with high effort. He’s going to be a really special one by the time he is done playing, for sure.”

NEDERLAND — Receiver Kyndon Fuselier lit up the Texas City secondary as the Bulldogs defeated the Stingarees 31-10 at Bulldog... read more