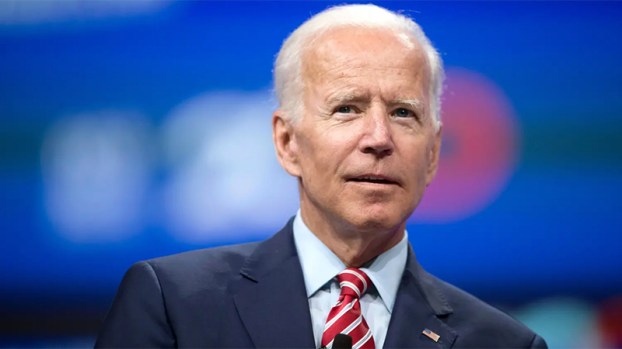 Joe Biden has broken the record for the most number of votes cast for any presidential candidate. (Michael Stravato/The Texas Tribune)

Democratic nominee Joe Biden has clinched enough states to win the 270 electoral votes needed to become president, The Associated Press declared Saturday, a day after Decision Desk HQ also called the race for Biden. His victory was cemented after Pennsylvania was called for the two-term former vice president under Barack Obama.

Various news outlets report that Biden is also ahead of President Donald Trump in Georgia and Arizona, two states that voted in Trump’s favor in 2016. (Georgia’s secretary of state says the state is headed to a recount.) With several states still counting ballots, Biden leads Trump by about 4 million votes nationwide as of Saturday morning.

“I am honored and humbled by the trust the American people have placed in me and in Vice President-elect Harris,” Biden said in a written statement. “With the campaign over, it’s time to put the anger and the harsh rhetoric behind us and come together as a nation. It’s time for America to unite. And to heal.”

Trump has refused to concede. His campaign released a statement shortly after the networks announced Biden’s win, saying the election was “far from over.”

“Joe Biden has not been certified as the winner of any states, let alone any of the highly contested states headed for mandatory recounts, or states where our campaign has valid and legitimate legal challenges that could determine the ultimate victor,” Trump said in the statement. “Beginning Monday, our campaign will start prosecuting our case in court to ensure election laws are fully upheld and the rightful winner is seated.”

Trump’s campaign filed legal challenges to contest the election results in three battleground states. Judges in two of those cases — in Michigan and Georgia — tossed out the lawsuits because the campaign failed to provide evidence that laws were broken. A federal judge also denied the campaign’s request to stop counting votes in Philadelphia, but ordered election officials to expand the number of people allowed in the room. The president’s campaign seeks to intervene in another pending Pennsylvania case stemming from mail-in ballots received after Election Day but before Friday’s deadline.

The Nevada Republican Party also asked the Department of Justice to investigate its baseless allegation that thousands of nonresidents cast ballots in the state. A DOJ official is reviewing the claim, USA Today reports.

Biden, meanwhile, projected confidence throughout the week. On Twitter, he said he and his campaign “continue to feel very good” and urged his supporters to stay calm. Friday night as his margins expanded in Georgia, Pennsylvania and Nevada, he and his running mate, Sen. Kamala Harris of California, spoke to supporters in Wilmington, Delaware. Biden stopped short of declaring victory but said, “We’re going to win this race.”

Biden’s win is historic: Not only did he break the record for the most number of votes cast for any presidential candidate, but the victory will make Harris the first woman and the first Black and South Asian American person to become vice president.

“Politics aside, this is a remarkable moment for our country,” Dallas Mayor Eric Johnson said. “We need more women and people of color in leadership.”

U.S. Rep. Colin Allred, a Dallas Democrat, said, “We will now have a leader who will listen to science to guide us through this crisis. A leader who will unite us as a country and work hard to heal our divisions by building consensus to solve the big problems we face.”

“We witnessed the counting of every vote and the beauty of democracy,” Austin Mayor Steve Adler tweeted. “The people of the United States decide who’s president. Let us now restore civility and dignity in all we do.”

State Rep. Jeff Leach, a Plano Republican, sent a tweet addressing Christians: “Dear Christians — if your first response is to spew hatred and damn Biden’s Presidency to the ash heap, you’re doing it wrong. We are called to pray for our leaders at all levels. And though I didn’t vote for him, I will fervently pray for my new President, Joe Biden. Join me.”

U.S. Rep. Marc Veasey, D-Fort Worth, spoke to the Tribune and called the day’s news a “healing” event in the country. Veasey was one of the Texans leading the charge for Biden in the consequential Texas primary when U.S. Sen. Bernie Sanders was the frontrunner for the Democratic nomination.

Veasey remembers riding with Biden to a Dallas event in March, when Biden was on the verge of grasping the nomination. “I thought to myself, you know, I think this man is going to be the next president of the United States,” he said.

Veasey said he had high hopes that Biden would carry Texas on Tuesday. Trump won the state.

“It didn’t quite happen in Texas, but the fact that he won Tarrant County where I’m from, and people said a Democrat was never going to carry Tarrant County in the presidential election and he did, so I’m happy that I chose him,” Veasey said.

Decision Desk HQ and The Associated Press called the election for Trump days after Trump prematurely — and falsely — declared victory in the election. On Thursday night, as polls showed the gap in vote totals narrowing in Georgia and Pennsylvania, the president spoke in the White House briefing room, saying “it’s amazing how those mail-in ballots are so one-sided” in favor of Democrats. (His statement came after the president spent months discouraging Republican voters from voting by mail, with the exception of Florida, and baselessly sowing doubt about the validity of those votes. Trump won Florida in both 2016 and 2020.)

Trump, who won Texas on Tuesday by roughly 6 points after winning by 9 in 2016, also railed against pre-election polls, saying they amounted to voter suppression — without explanation or proof.

And he doubled down on calls to end vote counting in states where the vote count at the time showed him in the lead while encouraging election officials to continue where he trailed Biden.

After speaking Thursday, Trump left the briefing room without taking questions. His claims followed a similar speech early Wednesday morning. In that speech, inside the historic East Room of the White House, Trump falsely claimed victory in states in which millions of ballots had not yet been counted. He proceeded to allege without any evidence that Democrats are stealing the election by continuing to count votes already cast and threatened to ask the Supreme Court to intervene.