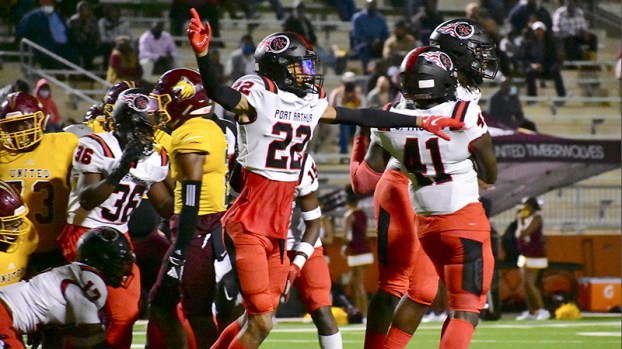 BEAUMONT — When the final whistle blew on the Memorial Titans’ 20-0 shutout over the Beaumont United Timberwolves, the Titans’ defense left little in question about who deserved to be called the best in the district.

Only two of those drives crossed the 50-yard line into Memorial territory, one of which was a drive where the only yards came from a 15-yard facemask penalty.

The Titans were able to stifle United’s top offensive weapon in quarterback Bradley Thomas. The dual-threat senior put up 238 yards on the ground against Port Neches-Groves in Week 2.

On Thursday the Titans swarmed the line of scrimmage, holding Thomas to 25 yards on seven carries. He was averaging more than 100 yards rushing per game heading into the contest.

Virtually any time Thomas went to escape the pocket, Titans edge rushers Jordon Thomas and Christian Thomas were there to contain him.

“We thought they would have a hard time blocking our defensive line and they did,” Memorial head coach Brian Morgan said. “We had a good night. Guys practiced well for two weeks, which is hard to get them to do coming off the bye week.”

The United passing game didn’t find much success either with 62 yards on 8-of-20 passing.

The Titans’ success in the secondary came without starting cornerback Jaylon Guilbeau, who had a “minor” injured his ankle during practice, Morgan said.

“When he is not playing and the defense still played well, it was good to see,” Morgan said.

In a game that has a history of being chippy, Morgan said his Titans handled themselves well. The Titans had six penalties for 45 yards, but only one was a personal foul for a facemask.

“We didn’t have any chirping going on,” he said. “We didn’t have any pregame stuff. Those guys just came out and played. We talked about that for two weeks. We told them just to be unselfish and play. We know when we go out there, our defense is going to give us a chance to win a football game, and those guys took care of business.”

The offense did the majority of its damage early, putting up all 20 of its points in the first half.

On the opening drive, the Titans marched 61 yards on 14 plays, which ended with an 11-yard pass from Jah’mar Sanders to running back Adrian Hayward.

Sanders finished the game with 237 total yards and three total touchdowns, two of them rushing. Hayward was his leading receiver with 70 yards on nine catches.

The Titans will host Baytown Sterling at Memorial Stadium on Nov. 14.