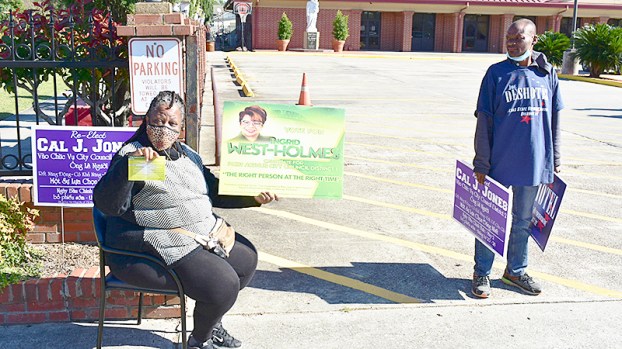 Judy Lamb and Daniel Alexis do Election Day campaigning outside the Queen of Vietnam Church in Port Arthur on Tuesday. (I.C. Murrell/The News) 11-3-20

In some ways, change is coming to Port Arthur because people don’t want things to be the same.

Those don’t seem to be high percentages — unless you’re familiar with the recent trend of voting for city elections.

Given that the previous record for a city election was 10 percent turnout — set when Thurman Bartie was elected mayor in 2019 — Port Arthurans spoke up loudly.

One can credit Taylor Getwood, an 18-year-old Wilson Early College High School graduate who can graduate from Texas Southern University in two years. When Getwood staged the #WeShallBreathe rally the day after a peaceful protest against racial unrest and corrupt policing in June, he encouraged us to make our voices count on a local level, not just in the presidential election.

One can also credit the NFL for allowing its players to be more vocal about the issues affecting them and their communities. One can credit celebrities for speaking up on the importance of voting.

Well, there were many positive factors that played no small part because the democratic process is no small aspect of this country.

And, what do we have in Port Arthur?

In districts 1, 4 and 8, we’re going to have new councilmembers — but we knew that already. Kenneth Marks will succeed Harold Doucet in District 4, but the other two districts (Willie “Bae” Lewis vs. Ingrid West Holmes in District 1 and Donald Ray Frank Sr. vs. Raymond Scott Jr. in District 8) will be determined in Dec. 19 runoffs, early voting dates for which have yet to be determined.

Now, in some instances, council positions won’t change, apparently because of changes already taking place around the city.

Cal Jones in District 2, Thomas Kinlaw III in District 3 and Charlotte Moses in at-large Position 7 maintained their seats, and all have been excited about the capital improvements and downtown development they helped enact on the council.

One can only wait to see what other much-needed changes will abound in the city.

Give the voters in Port Arthur a lot of credit. They — maybe you among them —overcame the hurdle of having to cast two different ballots, an impressive act of determination.

That’s exactly what Port Arthur’s Complete Count Committee exuded in the past year.

Knowing federal funds would be on the line, the U.S. Census Bureau’s Nonresponse Follow-up operation closed the gap in making sure every dwelling in Port Arthur and other cities were accounted for. The Complete Count Committee is thanking all of Port Arthur with a celebration from 11 a.m.-2 p.m. today at Empowerment Church, 3600 Memorial Blvd., with lunch, homegrown honey (while supplies last) and a “thank-you gift” from the committee.

Whether it was for a census or democracy, the people were determined to make themselves and this city count, bar none.

Now, it’s time for city officials to step up. If people are this motivated to vote, maybe Port Arthur’s officials will be just as motivated to make sure their elections fall on the same ballot as others in the very near future — bar none.

BEAUMONT — Once again, the Memorial defense proved its elite status as the Titans defeated the Beaumont United Timberwolves 20-0... read more