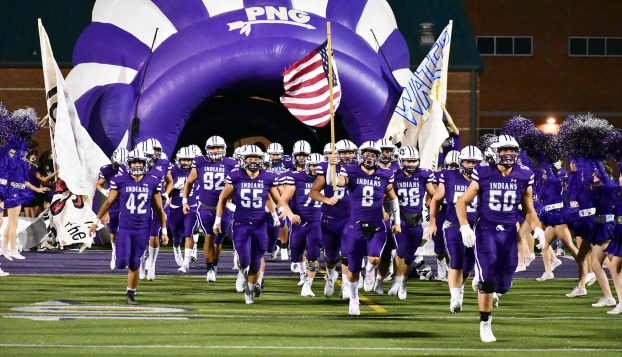 MONT BELVIEU — Spotting Barbers Hill three touchdowns in the first three minutes proved too much for Port Neches-Groves to overcome in a 54-28 loss in District 12-5A Division II Friday night at Eagle Stadium.

Quarterback Blake Bost led the way for the Indians, completing 18 of 34 passes for 155 yards and rushing 13 times for 84 yards and two touchdowns. Bost also threw a touchdown pass to Brady Nail, who had nine catches for 98 yards.

PNG (3-3, 2-1) received the kickoff to start the third quarter and picked right up where it left off to close the first half. The Indians marched down the field with Lance Vaughn doing the heavy lifting. He rushed for 23 yards early in the drive and capped it with a 24-yard TD run to make the score 40-21.

As they did for much of the first half, the Eagles responded right back. Brent Holdren hit Canden Grogan on a 37-yard scoring strike to push the lead to 47-21 with 7:05 left in the third quarter.

The Indians would not go away though, putting together another scoring drive on their next possession. This time it was Bost hitting Brady Nail on a 30-yard TD pass to make the score 47-28 with 4:00 left in the quarter.

The Eagles received the opening kickoff and needed only four plays to put the game’s first points on the board. Quarterback Brent Holdren carried on all four plays on the 73-yard drive with a long run of 59 yards that put the ball at the PNG 3. He scored on the very next play to make the score 7-0.

PNG fumbled the ensuing kickoff with the Eagles recovering the ball at the 13. Following an incomplete pass and an offside penalty on the Indians, Garret Hagler scored on an 8-yard run to make the score 14-0 with 10:18 left in the first quarter.

The Indians turned the ball over on its next possession as well. After Bost hit Brady Nail for an 8-yard completion and a first down, Bost was intercepted by Ashton Hamby, who returned it 42 yards for a touchdown. That put the Eagles up 21-0 with 9:04 remaining in the quarter.

PNG got on the scoreboard with its next drive, which took 11 plays and covered 85 yards. Bost completed a pair of passes, the last of which went for 8 yards to Lance Vaughn to give the Indians first-and-goal at the 6. Bost called his own number for a 6-yard TD run to make the score 21-7 with 5:26 left in the quarter.

It didn’t take long for BH to strike right back. Holdren started the drive with a 13-yard run. On third and eight, Holdren connected with Andrew Galvan on a 50-yard scoring strike to put the Eagles up 28-7 with 4:18 remaining in the opening quarter.

After forcing the Indians to punt, BH put together another scoring drive early in the second quarter. Holdren had carries of 9 and 10 yards, and Hagler added a 15-yard scamper. A Hagler 17-yard run gave BH first-and-goal at the 6. An incomplete pass on third down looked to force a field goal, but a late pass interference penalty against PNG put the ball at the 2.

Kennon Morton scored on the next play. The Eagles missed the extra point to make the score 34-7 at 9:36.

PNG had a promising drive going but it stalled at the BH 21. Tate Sandell came on for a 38-yard field goal, but it was blocked and returned to the Indians 46.

BH didn’t waste the opportunity. Holdren hit Canden Grogan for a 7-yard touchdown to make the score 40-7 as the extra point was no good.

The Indians closed out the first half scoring with a late drive. Bost ran for 9 yards on third-and-1 and for 22 yards on fourth-and-five to keep the drive alive.

Bost hit Vaughn for 19 yards to the 1. Bost scored on the next play to make the halftime score 40-14.

PNG turned the ball over on consecutive possessions in the first quarter. After BH received the opening kickoff and scored in four plays, the Indians fumbled the ensuing kickoff, which led to quick score by the Eagles. On the Indians’ next possession, a Bost interception was returned 42 yards for another touchdown to put BH up 21-0 three minutes into the game.

Quarterback Blake Bost, who completed 18 of 34 passes for 155 yards and one touchdown and added 84 yards rushing on 13 carries and two touchdowns.

PNG returns to The Reservation next Friday to host Kingwood Park at 7:30 p.m.

Barbers Hill hits the road next Friday for a 7:30 p.m. game at Santa Fe.

NEDERLAND — Receiver Kyndon Fuselier lit up the Texas City secondary as the Bulldogs defeated the Stingarees 31-10 at Bulldog... read more