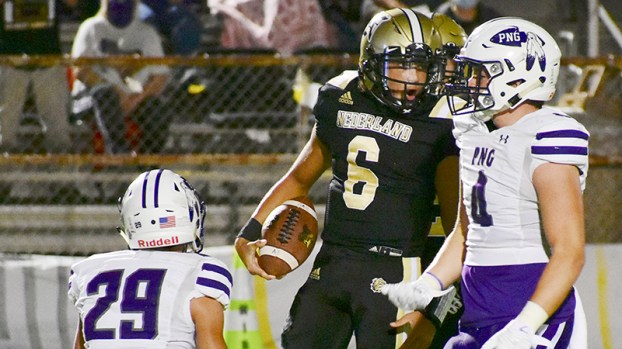 NEDERLAND — Nederland senior quarterback Rene Cunningham is a player any coach would want on their team.

In the Bulldogs’ first two district games, the former receiver/defensive back showed why he is the coaches’ pick to lead the team in 2020.

Against rival Port Neches-Groves, Cunningham sprained his ankle, missing the remainder of the first half. While the offense stayed on the on the field, the quarterback was on the sideline getting his ankle tapped.

When the Bulldogs came out of halftime, he remained on the sideline. As his team struggled to move the ball, Cunningham could be seen roaming the sideline, trying to loosen up his ankle.

After some time, the senior took the tape off and asked the coach to get put back in, where he went on to finish the game.

“He couldn’t put pressure on it at halftime,” coach Monte Barrow said of Cunningham’s ankle. “He comes to us in the middle of the third quarter, takes the tape off and says he’s good. I knew what it looked like the next morning, so I knew he wasn’t feeling real good about it. He put that aside and went out there for his brothers. That is not something that is natural. I think certain guys can summon that, and he is one of those guys.”

Cunningham said he plays for his teammates.

“It meant a lot to get back on the field,” he said. “I did it for them. I’d do anything for these boys. They are family.”

Cunningham is a dual threat, who can beat teams with a strong arm or with his legs.

“When he has the ball in his hands, he has a chance to make something happen,” Barrow said. “Whether it is with his arm, his legs or his brain, he can make it happen. He has come a long way since not playing quarterback since middle school. He could go right back to receiver and play it. That is the kind of athlete he is.”

Cunningham said if he was creating himself on a video game, his highest attributes would be toughness and arm strength, which he graded at 95 and 90, respectively.

“There is no selfishness in that kid in any form or fashion,” Barrow said. “He is a kid that you would not mind bringing home to your house and your kids and have them see and model after him. It is always great to have a guy like that to work with every day.”

Barrow said the team has full confidence in the quarterback.

“He has really taken to the position,” he said. “Our team has really accepted him as that guy. That is a big deal in this sport. They definitely trust him and he is only doing more and more to gain more of their trust.”

Bulldogs’ next mission: Follow up strong showing with homecoming win

NEDERLAND — The Bulldogs are hoping to build off what might have been their best performance of the season last... read more