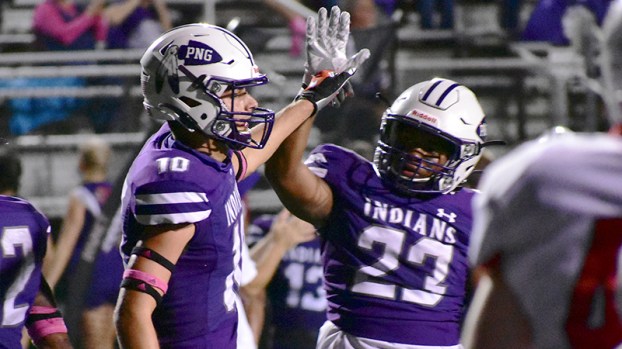 PNG wideout Grant Pearson high-fives tight end Daylon Bergeron after a catch down to the Tomball 1 during an Oct. 8 game. (I.C. Murrell/The News) 10-8-20

Receiver Grant Pearson, all 6-4 of him, towers over defenders

PORT NECHES — Fans of Port Neches-Groves football have surely seen the towering senior receiver for the purple and white.

When split out wide, 6-foot-4 Grant Pearson presents all types of matchup problems for defensive backs who are typically under the 6-foot mark.

The combination of size and athleticism make him a nightmare to guard one-on-one, PNG head coach Brandon Faircloth said.

“He has had a great year,” Faircloth said. “He is definitely a matchup problem for people. He runs really well and blocks really well. He has been really physical this year and we have been really proud of him for that.”

Faircloth said Pearson has really good hands, which likely help the multi-sport athlete pull down rebounds in the basketball season.

Pearson said he enjoys football more and added while he can dunk, catching a touchdown over a defender in the end zone ranked higher than dunking on an opponent.

“There are more fans,” Faircloth said laughing. “And it’s worth more points.”

While he said he enjoys both sports, Pearson said he prefers football.

“I just love everything about it,” he said. “I like being physical.” 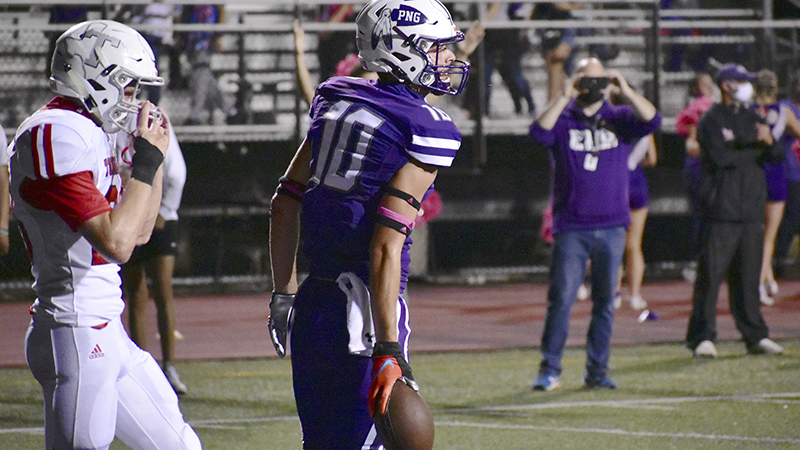 Faircloth said Pearson’s size allows quarterback Blake Bost to make a play if everything else is covered.

“He has everything you want in a receiver,” Faircloth said. “He has a lot of playing time under his belt. He has been on varsity since his sophomore year. He is a safety blanket for Blake out their on the field. It is always good to know where he is.”

Faircloth notices the game has slowed down for Pearson since his sophomore year. He added Pearson is among the tallest receivers that he has coached: “Now, he understands the little details of playing wide receiver. It’s fun to watch him. He has improved his route running, blocking and his technique. It’s been nice to watch him mature.”

While Pearson might tower over everyone on the field, he said that is not the case in his own home, adding his dad is 6-5.

“He has some size on me too,” Pearson said.

“I love his game,” he said. “Just everything about it is great.”