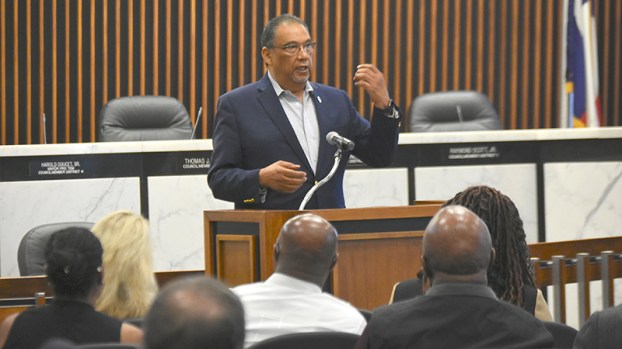 Joe Deshotel has earned another two-year term as District 22 representative in the Texas House.

The Democrat earned 68.26 percent of the vote in his race against Republican Jacorion Randle, a fellow Beaumont native. Randle is a student at Lamar University. Deshotel garnered 35,864 votes to Randle’s 16,673.

Deshotel’s district contains most of Port Arthur and Beaumont.

Deshotel, a lawyer, was first elected to the House in 1998 after serving on the Beaumont City Council, the Job Training Coordinating Council under then-Gov. Mark White and Lamar University’s Board of Regents.

During the 2019 state legislature, Deshotel was appointed to the House of Calendars, on which he helped structure items brought to the House floor for debate. He was also reappointed to the Joint Committee on Coastal Barrier System, and he served on the Human Services and State Affairs committees.

Deshotel authored 35 bills during the legislature. Among those that have been signed into law, one bill addresses civil liability and responsibility for defects in plans for the construction or repair of roadways, another gave the Port of Port Arthur Navigation District the authority to impose taxes, another created a disaster case management system for the Texas Division of Emergency Management and another related to the funding of certain ship channel improvements and authorized the Texas Transportation Commission to issue revenue bonds.

Come the state’s 87th legislature in January, Deshotel said he will work on job creation for economic development. He said industry leaders say it’s hard to find qualified candidates with regard to Port Arthur.

“We have an issue in our county, particularly in South County,” Deshotel said. “I will deal with jobs and applications. The law allows a business to ask if someone has been convicted of a crime on an application, but I would like to see that knowledge delayed until they had a chance to review the application and talk to the candidate.

“If they look at the application and check your references … then they’ve already had an objective look at you. … That may very well be the most suited person. By human nature, if you look at page 1 and find out that person has been convicted, you may have thrown away the best candidate.”

Another focus during the legislative session Deshotel named would be creating pre-trial diversion programs in which someone convicted of a low-level offense who doesn’t have a prior offense could be sent to an apprentice program and have the case dropped against him or her upon completion.

Deshotel also wants to push for unemployment insurance for part-time workers affected by the coronavirus pandemic.

Deshotel will once again serve alongside District 21 Rep. Dade Phelan (R-Beaumont), who earlier this week announced his candidacy for speaker of the Texas House. Phelan, a real estate developer whose district includes all of Orange County and parts of Jefferson County including Groves, Nederland and Port Neches, ran unopposed in the November election.