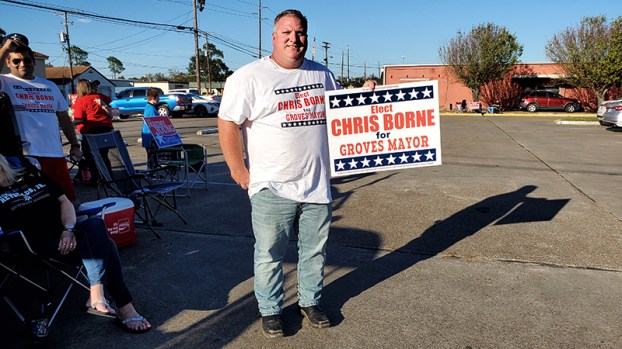 New Groves mayor: “We had record numbers. I appreciate everything that’s been done for me.”

For the first time in 20 years, Groves has a new mayor.

Borne called it a very humbling experience to have the overall support of the city, adding his team ran a clean race and it came down to his name at the end.

He is the first new mayor in the city in two decades.

“When Brad decided to walk away we knew it would open it for somebody new. It was my time and I put my name in,” Borne said. “We are very fortunate the turnout was what it was. We had record numbers. I appreciate everything that’s been done for me.”

Now he’s ready to go to work, he said, adding he is looking forward to stepping into his new role as mayor.

Now that he won the mayor’s race, someone will be appointed to complete his unexpired term.

Had Borne lost, he would have maintained his Ward 1 seat because his term is not up. He was appointed to the unexpired term of the Ward 1 seat in 2018 with the exit of then councilmember Cross Coburn. He then won the seat in 2019.

Borne is an electrician and works for an affiliate of Superior Energy Inc. and also owns his own business in Groves.

He and his wife Jessica have two daughters, ages 13 and 17.

The seat was vacated by Chris Borne, who was elected the new Mayor of Groves Tuesday night.

As we are all painfully aware, 2020 has been an especially stressful year. Here at United Board of Missions, where... read more