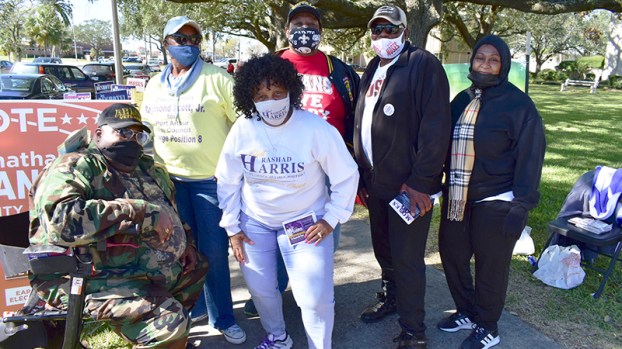 The inconveniences of waiting in two different lines to vote on Port Arthur city and county-through-presidential elections did nothing to slow down the record turnout rate during the Oct. 13-30 early voting period.

The number of Port Arthurans who voted on the city’s general and special election ballot reached 7,010, or 24 percent of registered voters in the city. That easily shattered the previous record of 10 percent turnout for the 2019 mayoral election won by Thurman Bartie.

Election Day Tuesday marked the end of a longer-than-expected campaign season for candidates in the six councilmember races, since the election was pushed back from May due to the coronavirus pandemic.

Election Day voters at the Queen of Vietnam Catholic Church and Port Arthur Sub-Courthouse freely walked in and out and did not have to endure the long-line headaches of the first early voting date.

“Today was a whole different ballgame,” said Anthony Jones, who was volunteering for a city council hopeful at the Sub-Courthouse. “I must say they did clean up and it’s going smoothly.” 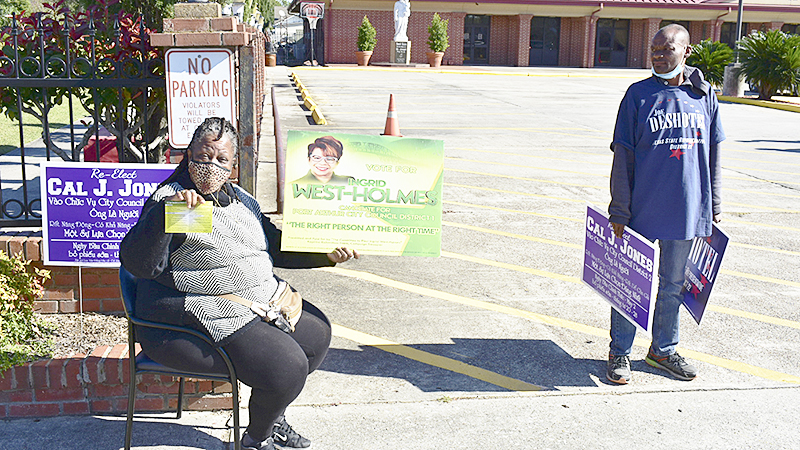 Judy Lamb and Daniel Alexis do Election Day campaigning outside the Queen of Vietnam Church in Port Arthur on Tuesday. (I.C. Murrell/The News) 11-3-20

Technical issues with Jefferson County voting machines hampered the first day of early voting at the Sub-Courthouse, but it only took a matter of hours to address the problem.

“However, we did learn we could have gone on and done the county election,” campaign volunteer Robin Hollins said. “I stayed the whole day and voted.”

Port Arthur city elections were not included on the county ballots because city officials did not turn in updated information regarding voters’ addresses in each precinct and council district by the Sept. 1 deadline, county officials said. The district lines were last updated in October 2011.

The city general elections included races involving all six councilmember seats (not counting Bartie, who is in the second year of a three-year term). The Port Arthur special election consisted of nine propositions to the city charter.

“The first day of voting, when I went to the library, the presidential line went easy,” said Charles Brown, a campaign volunteer. “When I got to the city, I had to wait in line an hour-and-a-half.”

More than 56 percent of Jefferson County voters took part in early voting. Of the 84,150 who did, 10,245 voted at Nederland’s Marion and Ed Hughes Library, 7,762 went to the Port Arthur Public Library, 6,273 were at Port Neches’ Effie and Wilton Hebert Public Library, 5,713 cast ballots at the Groves Activity Building and 2,947 were at the Sub-Courthouse.

Members of the Texas Military Department are deployed to support the Department of Public Safety in guarding historical landmarks, but not at polling sites. The department’s public affairs office said no request has been made “to provide any type of support at any polling location in Texas.”

A local man jailed in Jefferson County is accused of repeatedly sexually assaulting a Port Arthur child, starting when the... read more