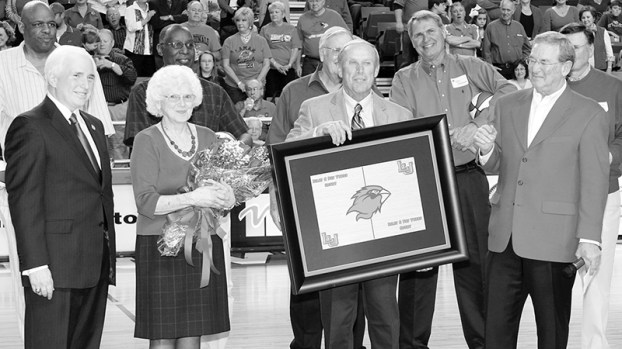 The basketball court at Lamar University was renamed in honor of Billy Tubbs, holding frame, and his wife Pat on Feb. 19, 2011. (Lamar sports information)

Billy Tubbs, who helped alma mater Lamar University raise its national basketball profile with a run of NCAA tournament success before a 14-year run at Oklahoma, died Sunday in Norman, Oklahoma. He was 85.

The University of Oklahoma shared a statement from the Tubbs family announcing his death.

The family said Tubbs battled a form of leukemia since being diagnosed in 2015 and “died peacefully surrounded by family.”

“Though his passing represents a tremendous loss for everyone close to him, our family is comforted by the knowledge he lived an extremely spirited life full of outstanding accomplishment in an out of sports,” the statement reads. “Many are aware of his remarkable achievements as a basketball coach, but we will remember him for way more than all of his wins, conference titles and NCAA Tournament success. He was a fierce competitor in everything he faced, and that was never more evident than in his final days.”

Tubbs replaced Jack Martin as head coach in 1976 and built a program that won Southland Conference regular-season championships in 1979 and 1980.

Tubbs helped the university reestablish its football program before stepping down as athletic director in 2010.

Norman Bellard, Lamar’s assistant to the president for community relations and a member of Tubbs’ teams in the late 1970s, said in a Lamar news release he felt he “got punched in the gut” when he first got the call of Tubbs’ death.

“To a lot of the guys on the team, he wasn’t just a coach and a mentor but a father figure,” Bellard said. “That was true up until the point when he passed earlier today and that will remain with us for the rest of our lives. Billy was a trailblazer. He changed the face of college basketball — from the time he coached us in the late ’70s to his success at Oklahoma and TCU.”

Tubbs’ teams were known for a high-scoring offense and full-court press defense, according to Lamar.

He was named conference coach of the year on seven occasions, including two at Lamar (1978 and 1980).

Lamar won 80 straight home basketball games, a streak that began under Tubbs in February 1978. Lamar played in McDonald Gymnasium before the Montagne Center opened in 1984.

“Over the years, Billy was very instrumental in not only the athletic achievements but also the things he taught on the coach have remained with me through my whole career,” Bellard said. “He was a players’ coach. He was demanding but he helped us achieve success that most of us probably didn’t think we could achieve. From the 80-game home court win streak, to a top-five rank in scoring, some of the things we were able to accomplish almost didn’t seem like it could’ve been possible.”

The next season, Tubbs led Lamar to its deepest NCAA tourney drive in program history.

The Cardinals — led by future all-time LU leading scorer Mike Olliver — again were seeded 10th in their region after repeating as Southland champions. They edged second-seeded Weber State 87-86 and then stunned No. 2-seeded Oregon State 81-77 before No. 6 Clemson knocked out the Cardinals 74-66 in the Sweet 16. The 1979-80 Cardinals, who went 22-11 and 8-2 in the Southland, averaged 82.3 points per game, which was 17th best in the nation. 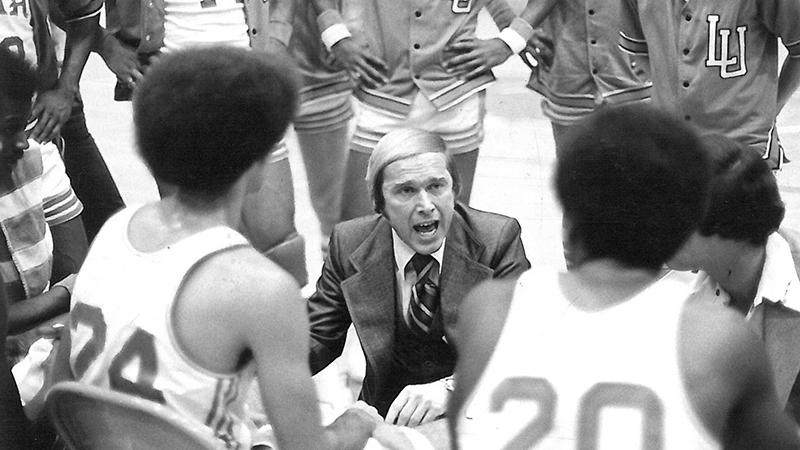 Tubbs parlayed his success in Beaumont into a job in the Big Eight Conference (later merged into the Big 12) and turned Oklahoma into a national contender within three seasons. Meanwhile his successor at Lamar, Pat Foster, continued the Cardinals’ NCAA success by stunning Missouri in the first round in 1981 and Alabama in 1983.

Tubbs’ 1981-82 Sooners went 22-11 and reached the National Invitation Tournament, losing to eventual champion Bradley. The next season, Oklahoma made the NCAA tourney led by a freshman center named Wayman Tisdale.

Tubbs’ tutelage helped Tisdale earn All-America status in each of his seasons for the Sooners. With the future NBA star and recording bass guitarist, Tubbs led Oklahoma to back-to-back Big 8 regular-season titles and a conference tournament title in 1985.

Oklahoma, with Tubbs coaching the likes of Stacey King and Mookie Blaylock, reached the national championship game in 1988 before a Larry Brown-coached Kansas squad stunned them. Oklahoma would ascend to a No. 1 ranking the next two regular seasons but not return to the Final Four until Kelvin Sampson’s 2001-02 team achieved the feat.

The Sooners won four Big 8 regular-season and three Big 8 tournament titles under Tubbs. He left Oklahoma after the 1993-94 season, when the Sooners missed the NCAA tourney for the third time in four years.

Tubbs enjoyed a measure of success at TCU over the next eight years while guiding the Horned Frogs through three conferences (Southwest, Western Athletic and Conference USA) in that time. His first team at TCU featured the nation’s leading scorer and rebounder in Kurt Thomas (28.9 points and 14.6 rebounds per game), and his 1997-98 team won the WAC regular-season title and earned an NCAA at-large bid.

His family wrote in their statement it “has always revered and continues to love OU,” adding Tubbs wore a “Cheer Like a Champion” shirt the night before his death while they watched the Oklahoma football team beat Texas Tech.

The basketball floor at Lamar’s Montagne Center was named in Billy and Pat Tubbs’ honor in 2011.

“Wherever Billy Tubbs was, he made it the best he possibly could,” the statement reads. “And we know that’s true right now, too. From the bottom of our hearts, thank you again for all of your true love, prayers and support.”

A St. Louis native who grew up in Tulsa, Tubbs lettered at Lamar from 1955-57 and averaged 6.8 points per game. He attended Lon Morris College (closed in 2012) in Jacksonville before transferring to Lamar.

He had been an assistant at his alma mater under Martin from 1960-71 before beginning his head coaching career at Southwestern University in Georgetown, near Austin. Tubbs went to North Texas as an assistant for three years before Lamar called him back to lead the program.