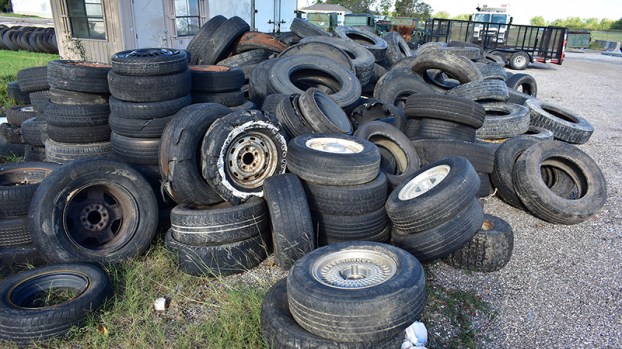 Illegal tire dumping has long been a nuisance in Port Arthur, and the city is combating it with a free tire collection event week.

“Unfortunately, a lot of people don’t care about how beautiful we try to keep our city, so we have to go behind them and pick up abandoned tires, and they wait until all odd hours of the night to go to dead-end streets or remote locations and dump the tires,” said Jennifer Edwards, capital improvements projects manager with Port Arthur Public Works.

“We do have crews who go out and pick up the tires,” she added. “But we decided to attack it from another end to say, ‘Bring these tires to us. We’ll have these events.’”

“I think it will help in reducing some of the trash and improving the beautification of our city around here, as well as reducing the possibilities of the breeding of mosquitoes,” City Manager Ron Burton said. “I think it will be an overall relief for the people that they have a place they can take their tires to and disposed of in a responsible manner.”

The event is limited to residents of Port Arthur. Those who bring tires must bring their identification card with a valid Port Arthur address and a city water bill with a matching address.

A maximum of eight car tires will be accepted. Commercial truck or heavy equipment tires and tires on rims will not be accepted.

Businesses and tire companies are not allowed.

“One of the things we have found also is that the police historically has stopped vehicles from tire shops coming from other cities,” Edwards said. “For instance, a police officer saw a truck riding around — it was like 3 o’clock in the morning — with a load of tires. He kept his eye on them. They went on Pleasure Island, and they dumped the tires. He let them drive off, and when they drove off, he pulled them over. He made them go pick it all up, and he cited them. They’re very diligent in what they’re doing to help us out.”

Edwards points out the city landfill isn’t equipped to take a whole tire because it takes up too much airspace and eats up capacity. The tires are collected and sliced at the Operations Center.

Another collection event will be held in the spring, Edwards said.

A Beaumont man accused of driving his vehicle through the entrance of Parkdale Mall in an apparent attempt to steal... read more