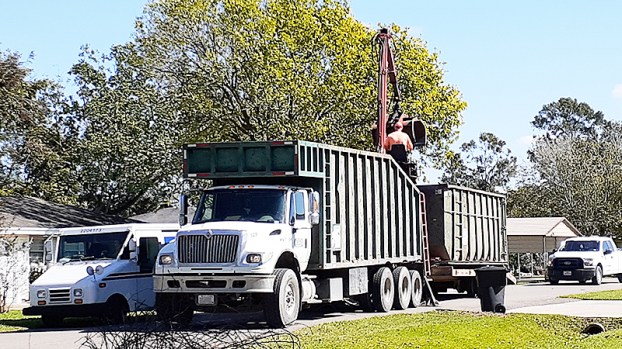 NEDERLAND — Robert Woods didn’t initially think the damage would be so widespread.

The director of public works for the City of Nederland started driving around the city late Oct. 9 when the rain and wind of Hurricane Delta finally died down.

What he and others found was large-scale damage, the type that would necessitate resources from beyond the city of approximately 17,000 residents.

Woods said during the drive that evening and in subsequent days, he and others noted street after street of downed trees and fences accompanying much in the way of power line and roof damage.

The problem for city staff was the day before Hurricane Delta struck, Nederland was a little more than two-thirds of the way through its Hurricane Laura cleanup efforts.

Now the damage remnants were more than doubled, which came as quite a surprise to City Manager Chris Duque, who said not a single regional emergency manager forecasted near the impact Jefferson County ended up receiving.

Through the quick approval of the Nederland City Council, an outside vendor was contracted to help with debris pickup and removal.

The first pass of that effort is expected to finish today (Oct. 31), with the second and final pass scheduled to conclude Nov. 20.

Mayor Don Albanese gives credit to an understanding citizenry, which is showing patience throughout a process that looks to stretch three months long.

“These guys are doing a heck of a job,” Albanese said. “We haven’t had a whole lot of people who were mad or distraught about it, because I think they understand the amount of debris. We were just getting Laura (debris removal) in pretty good shape when this last storm turned out a hell of a lot worse than Laura ever thought about being.

“I don’t know if there was a household in town that didn’t have a debris pile in front of it. The citizens of Nederland have been pretty good. We’ve had a few complaint calls. You always have that.”

Albanese said a debris pile in front of his house was picked up Wednesday, when officials noted 18,473 cubic yards of green waste and 6,643 cubic yards of construction debris had been collected throughout the city.

A total of eight trucks (4 double trucks, 4 single trucks) are working their way through Nederland, with city workers following the route, helping with the load and dealing with any citizen questions as they come up.

Nederland is also holding out hope that the region will be declared a federal disaster zone, allowing for reimbursement. If not, the sum of all the unplanned work will come from the city budget.

Duque said the city is working to execute the complete cleanup without needing to raise its solid waste rates. The City of Nederland has approximately 6,000 utility customers.

According to Duque, the cleanup effort was so large right after Hurricane Delta passed that it was tough to see the light at the end of the tunnel. This week’s first pass completion has greatly cut into that work.

Residents with specific questions about the process are asked to call the public works department at 723-1541 or the city manager’s office at 723-1503.

Authorities say a Port Arthur man grabbed a female family member by the neck and threw her down, then punched... read more