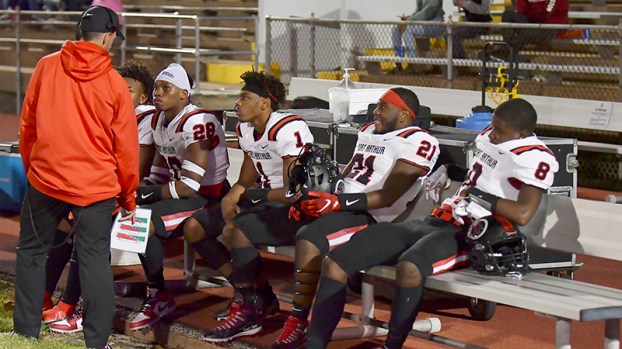 After sweeping the first half of their schedule, the Memorial Titans are using the bye week to rest up as they prepare for a Nov. 5 showdown against Beaumont United.

The Titans (5-0, 3-0 in District 9-5A Division I) put together a second-half surge to defeat the Galveston Ball Tornadoes 35-21 last week at Kermit Courville Stadium.

“We are going to take this week lighter just to get everyone healthy,” head coach Brian Morgan said. “We play next Thursday instead of next Friday, so we don’t have a full week next week. Our plan, depending on the weather, is to practice Tuesday, Wednesday and Thursday. I think we have three games before we have another bye. We’ve been fortunate to stay healthy.”

Morgan’s team is fortunate to have two bye weeks this year.

“This (bye week) is really important,” he said. “We played five good football teams, six if you count the scrimmage against Nederland. Nederland is a physical team, we played PNG to the end and Barbers Hill to the end. La Porte likes to bang. Goose Creek was physical and Galveston Ball was physical. It wasn’t like we played games where we were able to get guys out at halftime. They played every snap of those games.”

Memorial has played only two games that have been decided by more than one score (La Porte and Ball).

“It will be good to let them breathe this week a little bit and get their legs back under them,” he said.

“I think our guys settled down at halftime,” Morgan said. “Our defense made some adjustments, too. We didn’t know (Ball’s) game plan with the guy they had playing quarterback. We put a lot more pressure on them in the second half. It was good to see them adjust and play well. We were able to control the second half.”

In the second half of the season, the Titans will host more games at home after playing only once at Memorial Stadium.

The Titans will take a short road trip west to Beaumont to play United at BISD Memorial Stadium, before hosting Baytown Lee the following week. The Titans will travel to Baytown to take on Sterling at Stallworth Stadium on Nov. 20 before their second bye and finish off the season at home against Friendswood Dec. 4.

Bye week for all

NEDERLAND — After a last second, 21-20 loss to Port Neches-Groves, the Nederland Bulldogs are looking for a different outcome... read more