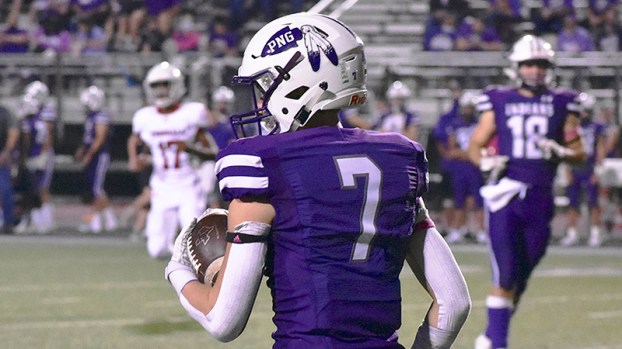 PORT NECHES — During the biggest game of the young season, Port Neches-Groves senior receiver Brady Nail had his best game, catching eight passes while racking up a game-high 138 yards in PNG’s 22-21 win over Nederland.

Nail has been one of quarterback Blake Bost’s go-to targets this year. The duo were consistently on the same page against Nederland, moving the chains.

Nail’s biggest play of the game came early in the third quarter when the Indians were backed into a third-and-22 from deep in their own territory. Bost dropped back and found Nail flying down the middle of the field for a 48-yard gain to keep the drive and their game alive.

Bost said he and Nail have played football together since they were 6 years old.

“We really have that connection,” Bost said. “I really trust that he is going to catch everything I throw at him. That’s why we always find a way to make that connection.”

Nail said he just took what was available and credited his quarterback with making accurate throws.

“I felt good coming into the game,” he said. “Blake threw really good that night. He was throwing perfectly to me.”

Nail said his hands are his best attribute as a receiver and his quarterback agreed.

“He rarely misses,” Bost said of Nail. “He hardly has any drops. That is for sure his best attribute.”

Those hands don’t just catch footballs. When Nail isn’t catching passes from Bost, he is dishing them out on the basketball court. Those hands that haul in touchdowns also perform clean crossovers and jump shots as a point guard for the Indians.

Nail said he couldn’t choose between the two sports, but said pretty much all of his time is dedicated to those outside of school.

Bost said no one game or play jumps out during the two’s long time playing together, but added he hopes the best is yet to come as the Indians look to make a deep run in the playoffs and stay undefeated in district.

The 14-day average of positive coronavirus cases in Jefferson County remains considerably smaller than when the average peaked at more... read more