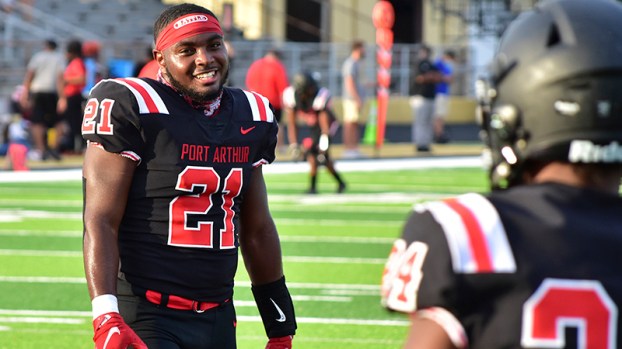 Memorial senior Branden Chaney is a jack of all trades.

He can line up at running back, receiver, anywhere in the defensive secondary and even linebacker. While he feels comfort at any position, he may be even more comfortable reeling in a big catch.

When he is not toting a football, he can be found with a fishing pole — a love passed down from his parents to him and his siblings.

“I’m a fisherman,” he said. “You can ask Coach Morgan. Now, he’s not that good, but don’t tell him I said that. I love to fish. I do it every chance I get. I don’t go as much as I like, because of football and everything else.”

Even though he fishes as a way to spend a peaceful day, the competitive fire still burns in Chaney, when he said he is the better wrangler out of his parents and three brothers.

“I’m definitely the better one,” he said. “(My dad) may have taught me, but I’ve learned more.”

In true competitive nature, Chaney would not give up the locations where he likes to fish, but offered the hints of “across the pier” and “near Sabine.”

“I was just born with a fishing pole and a football in my hands,” he said.

His football IQ is unmatched, making him a valuable player for the Titans, head coach Brian Morgan said.

“He is a good football player but a big-time leader,” Morgan said. “He’s played a ton of football. He even came up at the end of his freshman year and played some varsity football. He has a very calming personality and is very intelligent.”

Pulling a freshman up to varsity does not happen often, Morgan said. He added the move was a testament to how high they viewed Chaney.

“He plays multiple spots for us on offense and doesn’t take a lot of reps at it just because he is smart,” Morgan said. “He is like having another quarterback on the field. Last year, he was a huge help for Jah’mar [Sanders, starting quarterback]. This year, having both of them on the field, they can get guys lined up and everything.”

Morgan said Chaney is always ready to do what helps the team.

“Last week, he had to deep snap for us,” Morgan said. “He also returned a couple of kickoffs. He’s just a really good football player.”

Morgan said Chaney seeks contact as a runner. However, the senior said he is trying to pick and choose his spots this year.

“I will still deliver a blow,” he said with a smile.

Chaney said his physical nature makes it difficult for him to pick which side of the ball he prefers. On offense, he said his current position of running back is his selection. On defense, he prefers to be in the nickel or safety because players in those positions get the most action and those are where he has a greater chance of making a play.

He is hoping his 5-0 Titans can postpone any fishing trips with a deep playoff run.

NEDERLAND — The Nederland Bulldogs personify old-school football in many ways. They tend to lean on the rushing attack, fly... read more