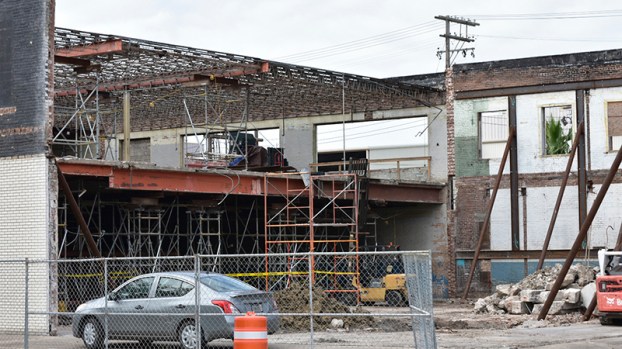 Beams are visible through the east end of the former Port Arthur News building on Fourth Avenue. (I.C. Murrell/The News) 10-27-20

The former downtown Port Arthur News building being converted into a community and business development center for the city is heading into the construction phase.

The inside of the 91-year-old building at 549 Fourth St. is now visible from the outside, with some of the walls taken down. The Port Arthur Economic Development Corporation (EDC) owns the building and projects the center, which will include EDC offices, a culinary center for Lamar State College Port Arthur and city emergency operations command center, will be fully ready by July 2021.

“We are finished with almost all the infrastructure,” Port Arthur EDC Director Floyd Batiste said. “That building was built in 1929 and built in four different components. Getting into it, we didn’t know what we were getting into.”

The cost of renovations has risen by $1.25 million to $8.5 million, but that’s after an environmental company was asked to go in to evaluate some “unknowns,” Batiste said. 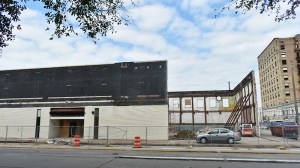 A wall is torn down on the east end of the former Port Arthur News building on Fourth Avenue. (I.C. Murrell/The News) 10-27-20

“Even after we got into the building, there was one tank nobody knew was underground. It was full of ink,” Batiste said. “Two-thirds of the building was built with concrete and the other third was built with wood, so the wood had to come down.”

The Press Building is now structurally sound, and EDC officials plan to do the work they intended.

The Lamar State College Port Arthur culinary center is expected to move into the facility, nicknamed the “Press Building” by March 2021, with the emergency operations command center to follow in April. 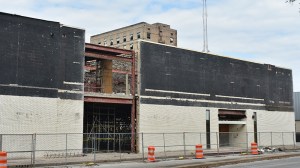 A portion of a front wall where the words “The Port Arthur News” were once nailed is taken down and reveals some of the structure inside. (I.C. Murrell/The News) 10-27-20

The EDC also is awaiting the green light from the Texas General Land Office to break ground on a 118-unit townhome-and-apartment complex adjacent to the present Port Arthur Health Department building on Austin Avenue. Batiste said 34 of the units would be townhouses.

The EDC has received $17 million from the General Land Office for the project and $15 million from the National Development Council, a nonprofit organization that will develop the housing complex.

“They went out and got the additional money to finish the project,” Batiste said.

The green light, he said, could come within 60 days.

The renovations are considered part of the ongoing downtown renaissance highlighted by the redevelopment of historic buildings into office space for Motiva Enterprises.

“We’re looking forward to having this thing ready next year and hopefully the people will enjoy the vision we’ve had for this part of downtown,” Batiste said.