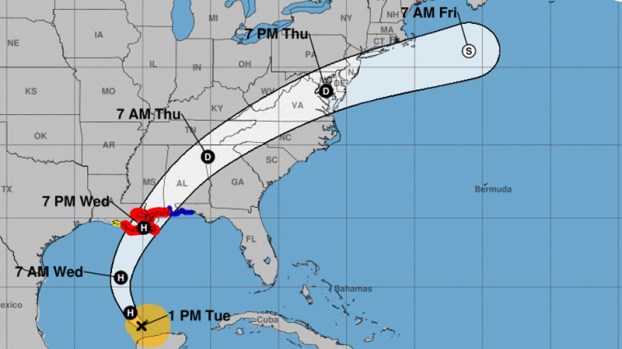 At 1 p.m. Tuesday, the center of Tropical Storm Zeta was located over the southern Gulf of Mexico, approximately 485 miles south of the mouth of the Mississippi River. Zeta is moving toward the northwest near 14 mph, and this general motion is forecast to continue Tuesday.

Zeta should turn toward the north Tuesday night, and a faster northward to north-northeastward motion is expected on Wednesday. 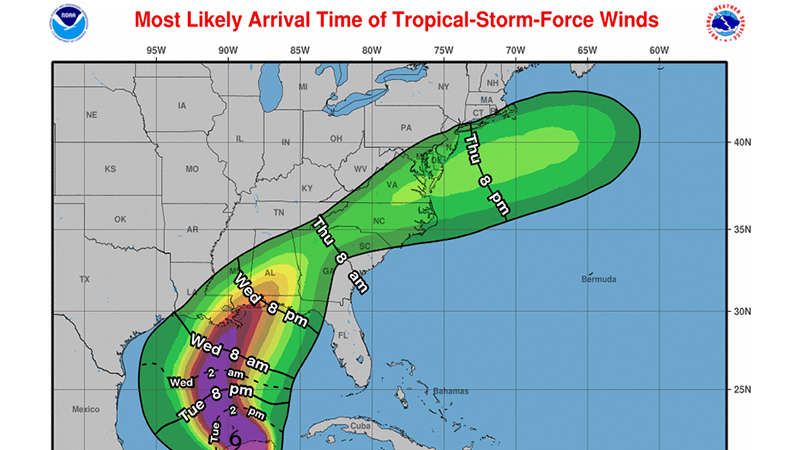 Zeta is forecast to approach the northern Gulf Coast on Wednesday, make landfall within the hurricane warning area late Wednesday or Wednesday night, and move inland across the southeastern United States early Thursday.

Maximum sustained winds are near 65 mph with higher gusts. Tropical-storm-force winds extend outward up to 140 miles from the center.

Zeta is forecast to re-strengthen while it moves over the southern Gulf of Mexico, and become a hurricane again later today, then be at or near hurricane strength when it reaches the northern Gulf Coast late Wednesday.

Rainfall totals of 4 to 8 inches with local amounts of 12 inches are possible through today across the Yucatan Peninsula of Mexico and the Cayman Islands.

An additional 1 to 3 inches of rain will be possible across western Cuba through Tuesday.

An initial area of heavy rains will begin to impact the central Gulf Coast tonight, with the core of heavy rains spreading north into the Ohio Valley and Mid-Atlantic through Thursday, near and in advance of Zeta.

Rainfall totals of 2 to 4 inches with isolated amounts of 6 inches are expected across these areas, resulting in flash, urban, small stream, and minor river flooding.

A few tornadoes are possible Wednesday and Wednesday night over southeastern Mississippi, southern Alabama, and the western Panhandle of Florida.

7 am TUESDAY UPDATE: Zeta moving toward northwest at near 14 mph

At 7 a.m. Tuesday, the center of Tropical Storm Zeta was located inland over the northern Yucatan Peninsula approximately 45... read more