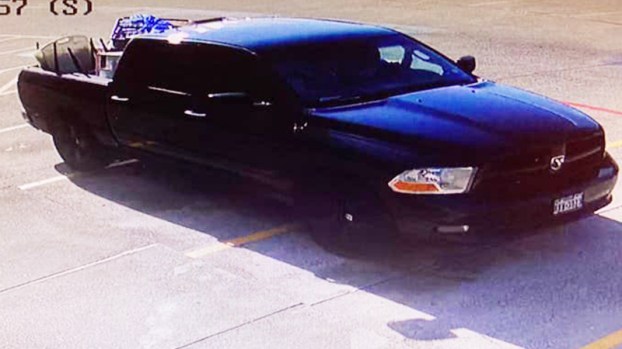 Port Arthur Police released this picture of a suspect vehicle.

The driver of a vehicle who reportedly followed a woman in a Walmart parking lot has been identified and the vehicle located.

Port Arthur Police Det. Mike Hebert said there are no criminal charges at this time.

“We are doing a preliminary investigation on the incidents,” Hebert said. “We are certainly looking into it.

Garcia and her daughters, a toddler and a teenager, were in the parking lot of the Walmart on Twin City Highway in Port Arthur when a man driving a 4-door, black Dodge Ram with equipment in the back kept driving near them, staring and flagging someone else to go his way.

She called her husband who was nearby, who then drove to the store and parked. As she was at the check-out register, her husband alerted her that the man was parked outside looking toward the entrance, she said.

Garcia headed out of the store with her children. The stranger began to drive toward where she was parked and signaled two other guys. They headed toward her truck, walking.

That’s when Garcia’s husband made it be known he was watching; the men then said something to each other and got into a car three spots from hers.

She got in her truck, locked the doors and called Port Arthur Police as she fled. Garcia told her husband she would drive to the police department if she were followed.

She told Port Arthur Newsmedia she headed toward the Groves Police Department but lost the men in traffic.

“I was on alert when I got there,” she said. “I had just seen posts about that happening and am always making sure my kids are with me and I don’t let them wander off, especially during the holidays.”

She noted the man’s suspicious behavior and asked him what he was doing. He told her he wanted to say “Hi.”

While the man made no criminal act, she has no idea what is intention was.

“I don’t know if maybe he had wanted to just steal my purse,” she said. “There’s no way for him to know I had two kids with me. He could have seen one but not two. I don’t know if he wanted to take my kids or not.”

Port Arthur Police posted photos and information on the truck the man was driving, saying there been several incidents reported involving the black Dodge Ram watching and following women in different areas of the city.

PAPD also said an unknown white truck has also been reported to be lurking around in the area at the same time, but no detailed description has been gathered.

If you see this vehicle, do not hesitate to call the Port Arthur Police Department and report any suspicious activity at 409-983-8600.

Port Arthur Mayor Thurman Bartie said he had not been apprised of the issue but learned about it Monday morning.

Garcia was asked if she had any advise for women when out and about.

“Be aware,” she said. “A lot of young girls get out of their vehicles on the cell phone. I tell my daughter to always pay attention to your surroundings and don’t go thinking it won’t happen. The world is crazy and is not how we used to be. We all have to be aware for each other.”

GROVES — Groves Police have identified the man who was killed in the early morning hours on Monday as Melvin... read more