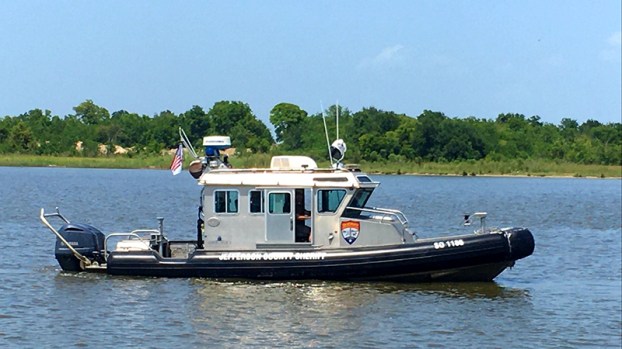 The Jefferson County Sheriff's Office released this picture of its marine unit.

SABINE PASS — Two boaters sitting on top of the hull of their capsized vessel and a third boater clinging to the side of the boat were rescued by authorities this morning in Sabine Pass.

The Jefferson County Sheriff’s Office Dispatch received a 911 call from boaters who had capsized near the West Jetty Wall near Sabine Pass at 8:54 a.m. Monday.

The Sheriff’s Office Marine Unit had a patrol boat in the inter-coastal waterway near the Neches River Intersection, which was quite a distance from the Jetty.

Due to the high risk of subjects possibly getting hypothermia and drowning, Sgt. B. Owens launched from the Sabine Pass station and headed to the area.

While en route, dispatch attempted to get a better location of the boaters’ location but was unsuccessful. The stranded boaters were unsure if they were on the Texas or Louisiana side.

Upon Owens’ arrival in the area, he began checking the Texas Jetty Wall. The U.S. Coast Guard arrived a short time later in their 45-feet boat and began searching the Louisiana side Jetty Wall.

At this time, the on-duty JCSO crew arrived and began searching from the middle of the Jetty Wall back toward the coastline.

Kelley and Davis directed Owens to the subject’s location, which was approximately 1,000 feet off the coastline.

Owens observed the boat upside down with the hull approximately 6 inches out of the water. Two men were sitting on top of the hull and a third was clinging to the side of the boat.

All three were wearing personal flotation devices and were pulled out of the water and onto the back deck of the patrol boat by Owens.

The U.S. Coast Guard marked the GPS location of the boat while Owens took the men to the U.S. Coast Guard Station Sabine docks. Once the men spoke to Coast Guard and Game Warden personnel, they were taken to their truck and trailer at the public boat ramp in Sabine Pass.

“Sgt. Owens’ quick actions and the teamwork by all of those involved lead to three men going home to their families today,” a Sheriff’s Office release said. “Outstanding Job!”

The driver of a vehicle who reportedly followed a woman in a Walmart parking lot has been identified and the... read more