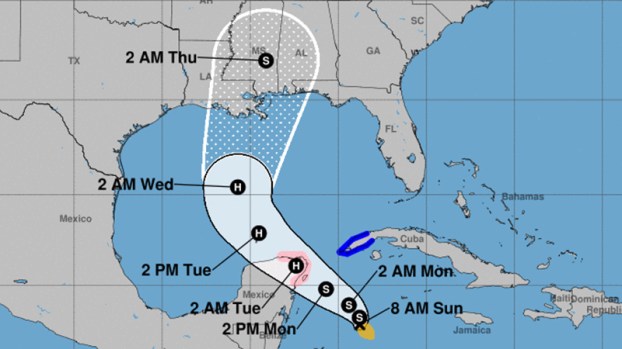 At 8 a.m. Sunday, the center of Tropical Storm Zeta was located over the northwestern Caribbean Sea about 290 miles south-southeast of the western tip of Cuba and about 275 miles southeast of Cozumel, Mexico.

A turn toward the west-northwest and an increase in forward speed are forecast by Monday, followed by a faster northwestward motion on Tuesday.

On the forecast track, the center of Zeta will pass south of western Cuba early Monday and move near or over the northern Yucatan Peninsula or the Yucatan Channel late Monday, move into the southern Gulf of Mexico on Tuesday and reach the central Gulf of Mexico by late Tuesday.

Maximum sustained winds are near 40 mph with higher gusts.

Tropical-storm-force winds extend outward up to 80 miles, mainly southeast of the center.

Gradual strengthening is expected to take place during the next 48 to 72 hours, and Zeta is forecast to become a hurricane by late Monday or early Tuesday.

Zeta is forecast to approach the northern Gulf Coast as a tropical storm Tuesday night and Wednesday, and could bring storm surge, rainfall, and wind impacts to areas from Louisiana to the Florida Panhandle.

Two local men were among a group of 21 arrested recently in an anti-human trafficking operation spearheaded by the Beaumont... read more