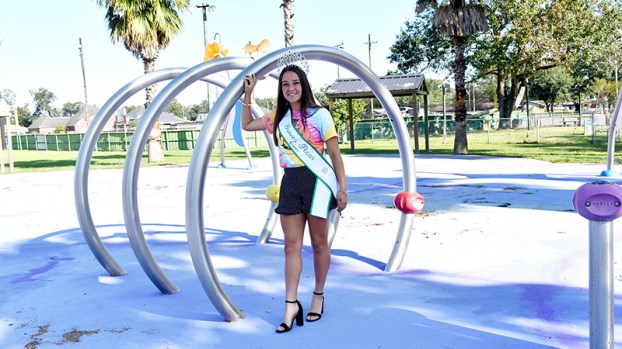 Groves Pecan Queen Grace Richard stands at the splashpad at Lions Park. With the 2020 festival and pageant canceled, she is reigning for an additional year. (Mary Meaux/The News)

The close-knit, small town feel was seen after Hurricane Delta, as neighbors across the city came together to pick up debris and help one another.

With her deep love for Groves, it is not a surprise that she accepted the chance to reign as Pecan Queen a second year after COVID-19 led to the cancellation of the 2020 festival and pageant.

Her mother, Rachel Richard, said Grace is a firstborn perfectionist who doesn’t like the light of attention on herself; she would rather others be honored instead of herself.

“I would describe her as a passionate young lady that strives for excellence in all she does and desires to honor her Lord,” Rachel Richard said.

Richard, a senior at Port Neches-Groves High School, has a busy schedule and hopes to add more activities as queen.

One activity is to read to children when the library is back up and running.

She took part in last year’s meeting and greeting of people at the festival, rode in parades and took part in a Christmas tee lighting ceremony.

She’s met with first responders and city council members and posed for photos with the general public while representing Groves.

“I love representing my city and representing the people of the community,” Richard said. “The festival is super important, it’s us coming together.” 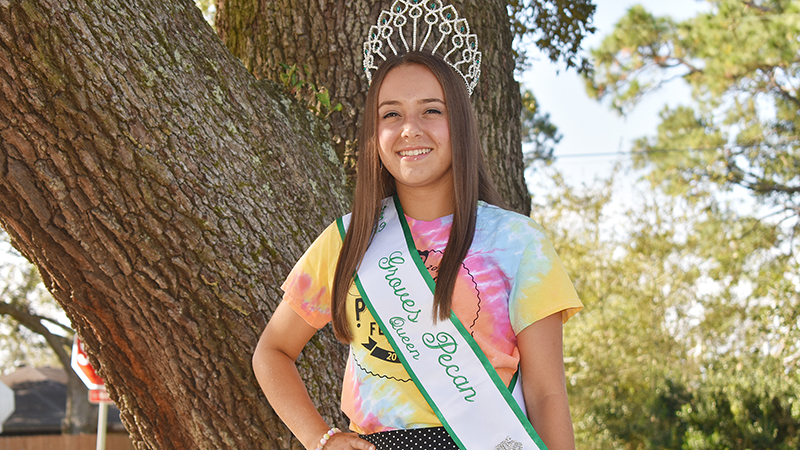 Groves Pecan Queen Grace Richard stands near a tree at Lions Park. Richard plays varsity soccer at PNG and made the varsity team in her freshman year. (Mary Meaux/The News)

Richard plays varsity soccer at PNG and made the varsity team in her freshman year.

She began the sport at age 7, playing at Gulf Coast Soccer and now plays at Dyno Dash Youth in Beaumont in addition to school.

“I signed for Lamar University Women’s Soccer and am really excited and honored,” she said. “They’re a Division I program. I have an athletic and academic scholarship, which is a huge blessing for my family.”

She is part of numerous activities at school, including being a member of the National Honor Society.

She’s also president of First Priority, a Christian organization that meets on Thursday mornings for prayer and worship. The group brings breakfast for those who may not have it, offers rides for those who may need one and strives to be the positive light.

She’s also a member of TRIBE, or Trusting Real Indians By Encouragement, and Youth Leaders of Southeast Texas and the Association of Indian Athletes.

She strives to grow her inner self and said she is not successful without good character.

Obviously, faith is a big part of who Richard is as a person, from her and her family’s worship at Encounter Church to the groups she is in at school. Through it all she works toward excellence.

“Excellence is part of who I am as a Christ-centered person, to give glory to the Lord,” she said.

And just because she strives for excellence by no way means she believes she’s perfect. Perfection is something that cannot be achieved, she said.

Perhaps you like your pecans solo, as in right-from-the-shell, just-picked from a Groves back yards. Kenneth M. Horowitz shares how... read more