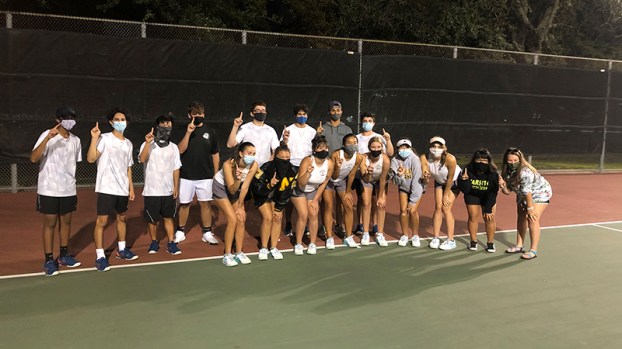 The Bulldogs will play La Porte at the Beaumont Athletic Complex at 3 p.m. Tuesday.

Nederland head coach Jorge Lopez said he was unsure if his team would even be able to complete the season at the beginning of the year. The Bulldogs ended up winning the District 21-5A championship.

“This year I was just hoping to finish the season,” Lopez said laughing. “With COVID and people getting sick, I was worried that they were going to cancel again. It was one of those things where I told the kids that we need to make this year a memorable year. “

Lopez pointed to their match against Barbers Hill Oct. 13 as one of the toughest of the season.

He said the loss of a graduating senior hurt the boys team, but added that he has been pleased with their growth.

“I knew we had a young guys team,” he said. “We lost Brandon Do last year. He was awesome — the state champion. We had some new boys that we brought in from the JV team. They have gotten better, but I didn’t know about them at first. The girls are solid. I knew if the girls played their game, we had the best girls in the district.”

Lopez said the girls team hardly dropped any matches this year and helped carry many of the contests.

“They dropped one match to PNG, who has a really good girls team,” he said. “They dropped two matches to Barbers Hill and that is it. The girls have one every single match other than those. We are 10-0 (6-0 in district play) and they didn’t drop any matches in the four other games either. The girls are good.”

Lopez said junior Megan Do, who is ranked in the state, and senior Heidi Hardy led the girls team.

“(Megan Do) is very good,” Lopez said. “Hardy is also undefeated in singles and doubles. Between the both of them, they have been given us three points every single match, which is nice.

Lopez said the bi-district matchup will be the Bulldogs’ first shot at La Porte.

“They moved into the district (22-5A) with Friendswood and Baytown Sterling, so we haven’t played them. That will be a good match. Even though they came in fourth in the district, that is a tough district…I think it is going to be a good match and the kids are going to have to show up. The girls are going to have to play like they have and carry us through and the boys will have to get a few wins.”

Summers said she is proud of her senior group, who were ninth graders during her second year as an assistant coach.

“I got a couple from me teaching at the ninth grade campus,” she said. “They came in just because they wanted to learn something new. In tennis, it’s harder for those kids. A lot of kids get the private lessons and have been playing for a long time. To see them grow they way they have has been impressive, because they are competing against those kids who have the lessons and the resources.”

All bi-district games are scheduled for Monday and Tuesday.