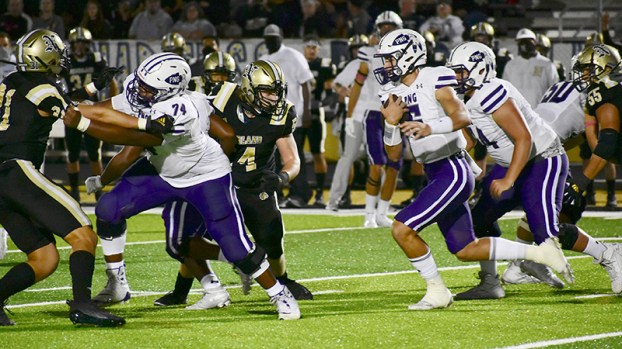 PNG quarterback Blake Bost finds an open hole with blocking from Landen Vaughn (74) as Jacob Kotz (54) moves in for the tackle in the first quarter Friday in Nederland. (I.C. Murrell/The News) 10-23-20

NEDERLAND — In true madness fashion, the rivalry game between the Port Neches-Groves Indians and Nederland Bulldogs came down to one of the last plays as PNG won 22-21 Friday at Bulldog Stadium.

On fourth-and-5 from the Bulldog 8 with 13 seconds left in the game, PNG quarterback Blake Bost rolled out and fired toward the end zone, missing a connection with an Indians receiver. What seemed to be the end of the game was halted when the referees called pass interference on the Bulldogs, giving the Indians first-and-goal from the 2 with 7 seconds left.

On the next play Bost rolled out and found senior running back Daylon Bergeron in the flat for the go-ahead score with 2 seconds remaining. 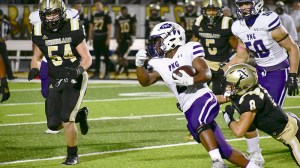 Lance Vaughn (2) of PNG turns upfield as he tries to avoid a sack by Kyndon Fuselier (8) of Nederland in the first quarter Friday in Nederland. Also in on the play are Jacob Kotz (54) of Nederland and Corey Burt (50) of PNG. (I.C. Murrell/The News) 10-23-20

“We’ve been in that situation this year,” PNG head coach Brandon Faircloth said. “It goes back to our non-district schedule. We were in the same situation against Memorial, where we had to go down and score at the end of the game. I’m just proud of our guys for their grit, never giving up and playing the next play. We were fortunate there to have the ball last.”

Prior to the fourth down play, Nederland head coach Monte Barrow called timeout as the play clock expired. The penalty would’ve backed up PNG an additional five yards. Barrow said he wanted to make sure his defense was set.

“They were set,” he said of PNG’s offense. “They could’ve possibly snapped it and we just didn’t want to take that chance. That’s why we called that timeout.”

On the opening drive of the game, the Bulldogs (1-2, 0-1  in District 12-5A Division II) forced PNG (2-2, 1-0) into a three-and-out. On the ensuing drive, Nederland senior quarterback Rene Cunningham found room to run up the middle for a 31-yard gain to get his team down to the PNG 22. On the next play, senior running back Josh Mazyck broke free for a 22-yard run to give the Bulldogs a 7-0 lead over PNG with 8:33 left in the first quarter.

After a PNG punt Nederland also went three-and-out, but the drive would cost them. Cunningham was injured on a 1-yard gain. Trainers helped him off the field, and Corbin Chandler took his spot.

On the Bulldogs’ next drive, Mazyck broke multiple tackles on his way to a 69-yard run to the PNG 24. Chandler connected with junior receiver Kyndon Fuselier on a 29-yard pass that put the Bulldogs in position for a Chandler score on a 3-yard run with 10:23 left in the second quarter. 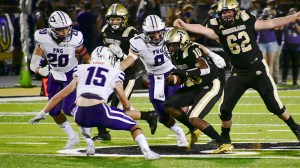 On the Indians’ first drive of the second quarter, PNG set up by a 32-yard field goal for Tate Sandell to make the score 14-3.

On the following kickoff, PNG kicked the ball short and high to an unsuspecting Nederland return team. PNG recovered and took over at the Nederland 40.

Seven plays later, senior quarterback Blake Bost punched it in from 5 yards out to bring the score to 14-9 after PNG missed the extra point with 1:32 left in the first half. The score would remain the same at halftime.

After forcing Nederland to punt on the first drive of the second half, Mazyck broke free again, this time for a 75-yard score. Cunningham returned in the second half from a high ankle sprain, Nederland head coach Monte Barrow said.

“He came out in the second half and told the trainer to cut the tape off and started moving around,” he said. “I was super proud of him. He is as tough a kid as there is. There is nobody who prepares more at getting ready, for not just a game, but a season than he does.”

With 8:30 left in the game, the Bulldogs got the ball back with a chance to ice the game. Nederland was able to run about 4 minutes off the clock with an efficient run game until Mazyck fumbled on the PNG 25 leading to the final score by the Indians.

Mazyck finished with 253 yards rushing on 20 carries and three touchdowns. The Indians leading receiver was Brady Nail, who had eight catches for 138 yards.

PNG hosts Dayton for its homecoming game at The Reservation. Nederland will travel to Santa Fe to take on the take on the Indians. Both games kickoff at 7:30 Friday (Oct. 30).

PORT NECHES — The names, weapons and rooms are as familiar as the board game that was made into a... read more