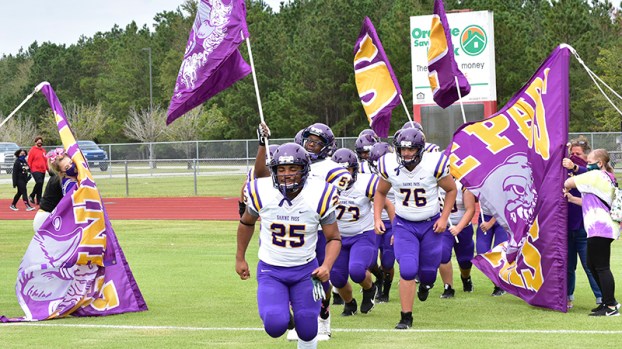 SABINE PASS – The Sabine Pass Sharks couldn’t overcome a bad snap and an inadvertent whistle in the game’s final minutes as they dropped a 16-8 decision to the visiting High Island Cardinals in a District 12-2A Division II game between two squads battling for the division’s final playoff spot.

The Sharks (0-3, 0-3 in 12-2A-II) seemed to be in good position to snap an 8-8 tie late in the fourth quarter when High Island was forced to punt. After a bad snap, the High Island punter managed to get a short kick that was fielded by a Sabine Pass returner. However, the play was blown dead with an inadvertent whistle. Instead of giving the Sharks the ball in High Island territory, the officials ruled that the down be replayed. The next punt pinned the Sharks back in their own territory.

The Sharks couldn’t move the ball, and had their punt blocked after a bad snap, giving High Island the ball on the Sabine Pass 3. One play later, Joey Lester scored the game-winning TD for the Cardinals (1-5, 1-1).

“I thought we should have had the ball where they blew the play dead,” Sabine Pass coach Jason Thibodeaux said. “I guess the referee was looking at a different rule book.”

Both teams struggled on offense on the spongy field that was soaked earlier in the day by torrential rains. Scoring chances were hard to come by.

After a scoreless first quarter, the Sharks opened the scoring early in the second quarter when Ahmad Lorthridge raced into the end zone from 16 yards away. Quarterback Jeremy Fontenette hooked up with Rylan Johnson for the two-point conversion to put Sabine Pass up 8-0.

High Island evened the score at 8 before halftime on a 7-yard TD run by Dade Brindley and the ensuing two-point conversion run by Lester.

“We gave it all we had, but we ran out of gas at the end,” Thibodeaux said. “Almost everybody played both ways. It really hurt us when our top running back, Ahmad Lorthridge had to leave with an injury.”

Despite the loss, Thibodeaux remained upbeat.

“I didn’t think we were going to have a football team this year,” he said. “But we had some players come out, and that allowed us to have a team. I am so proud of them. We may have lost the game, but these kids are winners in life.

High Island blocked a punt after a bad snap late in the fourth quarter, giving the ball on the Sabine Pass 3-yard line. Lester scored the game-winning TD on the next play.

Ahmad Lorthridge, who had 91 yards on 15 carries before being injured in the fourth quarter. Lorthridge refused to leave the sidelines after the injury, sitting in a chair to cheer on his teammates.

The Sharks hit the road for a division game at Evadale at 7 p.m. Friday.

NEDERLAND — With all of the pomp and circumstance surrounding the historic Mid-County Madness rivalry, the Nederland Bulldogs are leaning... read more