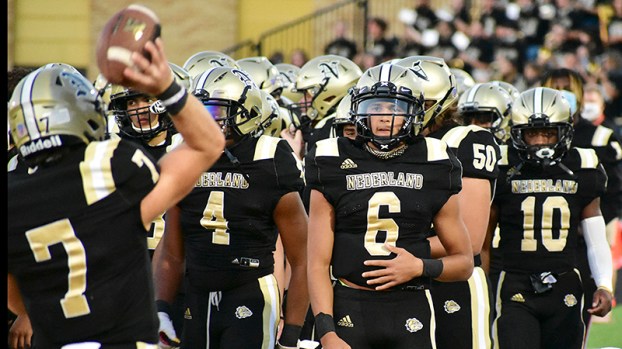 NEDERLAND — With all of the pomp and circumstance surrounding the historic Mid-County Madness rivalry, the Nederland Bulldogs are leaning on senior leadership to guide younger players through the week and up to game time.

“We try not to change too much for our practice,” Nederland head coach Monte Barrow said. “That keeps them focused on the task at hand.”

Kickoff against Port Neches-Groves is set for 7:30 p.m. today at Bulldog Stadium.

The contest marks the 97th contest in 95 years between the Bulldogs (1-1) and Indians (1-2). The record stands at 51-38-7 in favor of PNG, but since the introduction of The Bum Phillips Bowl trophy, the record is tied at 3-3. The game will also be the first District 12-5A Division II game for either team.

Even though the Bulldogs have won seven out of the last 10 contests against their Mid-County rival PNG, it is the Indians who have won the last two. Nederland’s seniors have not beaten the Indians since they have been on varsity.

Bulldogs running back Josh Mazyck said the streak dates back a little longer for his fellow seniors.

“We have lost to them five years straight since middle school,” he said. “This game means a lot to us.”

Barrow said his coaching staff has let Mazyck and other seniors dictate the emotion of practice.

“You build all offseason and work on the maturity of your team,” Barrow said. “This is when that peaks. Does our leadership not allow that to creep into the young guys, for whom this will be their first Mid-County Madness?”

The coach said his seniors have stepped up to the leadership role.

“I support their feelings,” Barrow said. “They are trying to lead the younger guys in practice. As coaches, we want to back that up when they are doing it the right way. It’s their game. It’s their team. This is their senior year. They have been waiting to lead this. We want to support them and put them in positions to make plays.”

Barrow said having strong leadership from players is invaluable.

“Peer pressure is stronger than any other thing,” he said. “It was that way when I was young. Things haven’t changed. Whether it is positive words or negative words from a teammate, they have more of an impact. When a coach says something, it’s just instructions. We are trying to stay with X’s and O’s and let the seniors handle the intensity of practice. If they get on a guy for taking a lazy step, that is good and it means something coming from a teammate.”

Barrow said his message to his team this past week has been to focus on the game.

Over the last decade 7 of 10 games have been decided by one score, meaning the most important play will likely be late in the game.

“He is a great player, who has developed over the last couple of years,” he said. “Bost is the No. 1 challenge. They go as he goes. The entire team does. He is that kind of player. We understand. We have to have 22 guys playing defense on him — the guys on defense and the guys on offense making sure he doesn’t get the ball back.”

The Bum Phillips Bowl Trophy will be awarded to the winning team on the sideline after the game.