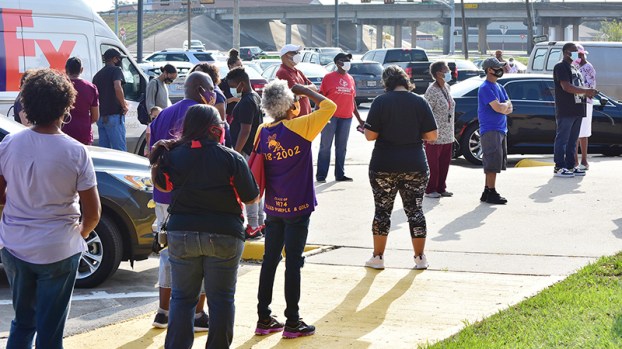 The turnout for the Port Arthur city general and special elections trails that for races included on the Jefferson County ballot, but Mayor Thurman Bartie on Wednesday expressed optimism over the rate at which registered voters in the city are going to the polls.

City Secretary Sherri Bellard confirmed 12 percent of registered voters in Port Arthur have cast ballots through the first six days of early voting (Oct. 13-16, 19 and 20), which will remain open each day through Oct. 30. That rate exceeded the 10 percent that turned out for the 2019 mayoral election — a percentage Bellard called a record for the city.

But while 5,520 have cast county ballots at Port Arthur’s two early voting sites, 3,469 Port Arthurans have voted in the city election.

“When we’re looking at it statistically, we’re doing good,” Bartie said. “When we look at the aggregate voters, that’s not good, but you have to look at it from the standpoint of how we vote in Port Arthur. When we take that same view and see the number of people who vote in Port Arthur, some Port Arthurans choose not to vote Port Arthur city council.”

Port Arthur voters must fill out two ballots to participate in all elections from the local to federal levels. The city election was not included on the Jefferson County ballot, which also includes countywide, statewide and federal elections including the race for president.

County election officials said Port Arthur city officials did not turn in updated and correct information regarding voters’ addresses in each precinct and city council district by the Sept. 1 deadline. The district lines were last updated in October 2011, and county officials said the problem has been ongoing since.

Bartie said earlier this month the county could have further assisted the city in the matter. Instead, one voting line for each ballot is formed at both the Port Arthur Public Library and Jefferson County Sub-Courthouse.

The mayor said he spent 1½ hours in the city line at the library and had to come back to vote on the county ballot.

“There are some who had to stay in the lines for two hours,” Bartie said. “I applaud those individuals.”

Bartie suggested “voter apathy” for local government — and possibly the lack of voting convenience — are leding to lower numbers in the Port Arthur election thus far.

“I think it’s the known understanding of municipal government,” he said. “What folk have to know is we’re the closest government to them. That should cause a person to really vote in elections. I think voter apathy is a learned behavior. Some people will hide behind some philosophical belief.”

The city ballot includes the general election for races in all six councilmember positions (other than Bartie’s) and the special election for which nine propositions will be voted.

Bellard said Port Arthur averages a 4 to 7 percent turnout for city elections, adding the turnout reached as high as 5 percent if a mayoral race was not included. The next mayoral election in the city is scheduled for 2022.

“All we can do is encourage everyone to vote and have that opportunity,” Bartie said. “Realistically, we’re still going to have a good turnout in correlation to last elections.”

County Clerk Carolyn Guidry reacted “Wow!” at first glance of the total county number, which exceeded 38,844 through six days of early voting in 2016.

“If they keep up at this pace, that would be great,” Guidry said. “I like to see it at this pace.”

Of the 10,500 mail-in ballots the county has sent out, 6,400 have been returned, beating the six-day pace in 2016 by more than 1,000, Guidry said. Friday is the last day that either a county ballot sent by mail can be postmarked or faxed to the county clerk’s office; if faxed, the original must be received in the office four days afterward.

Bellard said Texas Secretary of State Ruth Hughs has approved Port Arthur’s 10 Election Day polling locations to be vote centers, meaning residents can vote at either location regardless of precinct Nov. 3. There will still be a separate line for each ballot, however.

(Note: Daily totals were not available)

GROVES — First United Methodist Church of Groves has had its day in court, and prevailed, when city prosecutor Jesse... read more