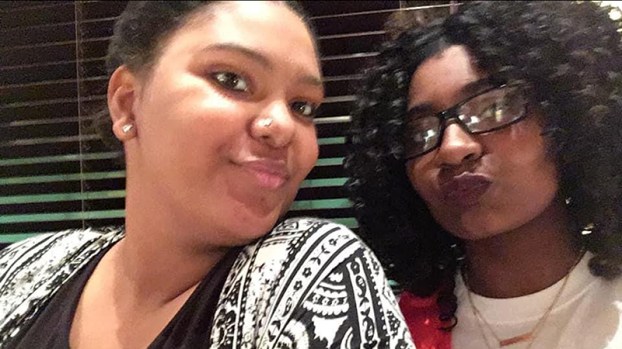 Jasmine Newman, left, and friend Roneshia Collins pose together in this undated photo. Collins was with Newman on the night of the homicide and was shot three times. Courtesy photo

The community has a chance to help a Port Arthur family grieving the senseless loss of a loved one.

Just a phone call, a tip made anonymously can help solve a murder and bring some sort of closure to a family.

Jasmine Newman was with friends having fun and listening to music on the night of Oct. 19, 2019, when, as the crowd was saying their farewells and heading out, shots rang out ambush style from a dark alley across the street.

The group scattered and ducked for safety. In that estimated five seconds of bullets flying, four people were hit. They all suffered non-life threatening injuries, except for one — Newman. She was hit multiple times and died a day before her 23rd birthday. She left behind two small children.

Police detectives and family confirmed Newman had no criminal background and was not affiliated with any crime group or gang.

And in the year since the killing, the police have received no tips.

Newman’s mother Jermel, children and other family members and friends gathered outside the 1100 block of Vicksburg Avenue on Tuesday — what would have been Newman’s birthday — to speak out in pain, offer prayers and plead for someone to come forward with information to solve her daughter’s murder.

Just being in the area where her daughter took her last breath was somber and emotional to see. Jermel stood next to the Rev. Robert Johnson of First Baptist Church Sabine Pass, who along with other family members and friends, offered prayers and sang part of a hymn, his voice lending words of comfort.

Jermel, hands clasped together, leaned her head back and looked to the sky as if to see her daughter once again as tears ran down her face.

Earlier, Jasmine’s young daughter, wearing her hair in braids, shirt with a large heart on it, dark pants and gold colored shoes, skipped along with a family member, happily saying she was going to say “happy birthday” to her mother.

Both she and the younger brother are too young to remember Jasmine, but family members are keeping her memory alive for them.

The children’s father, who did not give his name, addressed TV cameras in an angry tone. He, and all at the event on Tuesday, knows answers are out there — someone needs to come forward.

If you have information on this crime, call the Port Arthur Police Department at 983-8600 or Crime Stoppers of Southeast Texas at 409-833-TIPS.

You won’t be asked your name and may be eligible for a cash reward. An anonymous tip can also be sent by downloading the P3 Tips app on a smartphone.