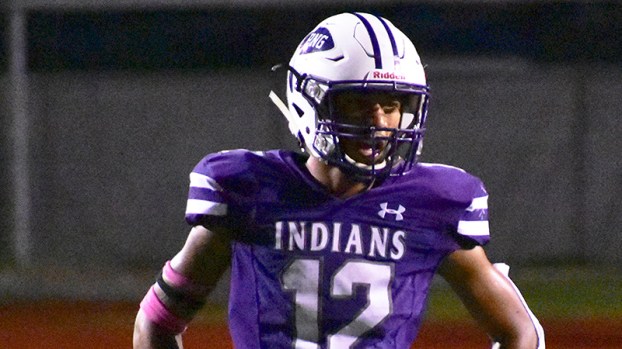 PORT NECHES — As the Port Neches-Groves Indians lined up to practice field goals, one voice could be heard over the group.

Senior running back Dejaunte “Dede” Conner was cracking jokes, keeping the tone light as his team prepared to take on the Nederland Bulldogs.

“That is the special part of a team,” he said. “We have all different types of kids. He keeps it light and he has fun. That is what makes him enjoyable to coach. Everyone loves being around him. He is always in a good mood. He works extremely hard. Every attribute you would want in a running back, he has it.”

Conner said his speed is his No. 1 attribute. He also doesn’t lack confidence, listing “fast” and “incredible” as ways to describe his running style.

“I have a lot of agility,” he said with a smile.

“He is a great player,” Faircloth said. “He is fast and strong. He is a complete player, who can catch the football out of the backfield and he’s a great blocker for Blake (Bost). He is also a great teammate.”

The PNG back said he doesn’t have any favorite NFL teams, but roots for players. He named Saints’ running back Alvin Kamara, Cowboys’ quarterback Dak Prescott and Chiefs’ wide receiver Tyreek Hill. While his size and speed might remind fans more of Hill, Conner said he takes most of his game from Kamara.

Conner said the most memorable play of his career was his first touchdown, which came against Santa Fe, which was his second varsity game his sophomore season.

“I hit the hole,” he said. “It was wide open. I think it was 42 yards exactly. After I hit the hole, I broke off of two tackles and was gone down the sideline. All I could see was the people jumping. It was an incredible feeling.”

Conner finished that game with three carries for 66 yards and that lone touchdown as PNG went on to beat Santa Fe 47-19.

After a Port Arthur Memorial player inadvertently touched a punt that gave Goose Creek Memorial the ball on the Titans’... read more