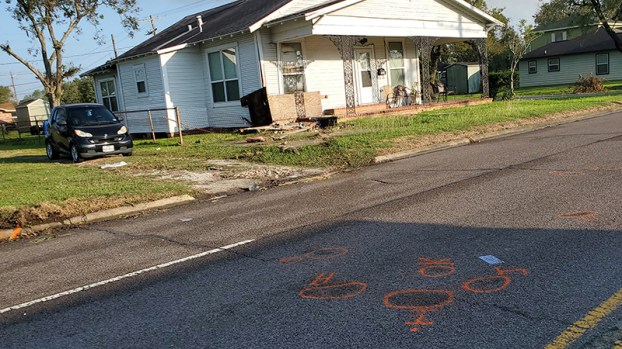 A pedestrian was struck by a vehicle that crashed into a home in the 1800 block of Gulfway Drive after which a second vehicle struck the victim in the roadway and fled. The pedestrian died from his injuries. (Mary Meaux/The News)

Driver of 1st vehicle to strike pedestrian not cited, search on for 2nd vehicle after man killed

A driver who police believe struck a pedestrian then crashed into a house last week has not been cited at this time as officers search for a second vehicle that fled the scene after striking the pedestrian.

Robert Hayward, 42, of Port Arthur was killed Oct. 14 while attempting to cross the roadway in the 1800 block of Gulfway Drive. He was thrown to the ground when the first vehicle struck him. That vehicle went off the roadway and then struck a house.

Port Arthur Police determined a second vehicle struck Hayward while he was in the roadway then fled the scene.

Det. Sadie Guedry said the case is under investigation.

Police are not releasing information such as make and model of the first vehicle, the number of occupants or if the driver or any occupants needed medical attention due to the crash.

Police directed Port Arthur Newsmedia to file a Freedom of Information Act request for this information.

Guedry said police do not have a description for the second vehicle.