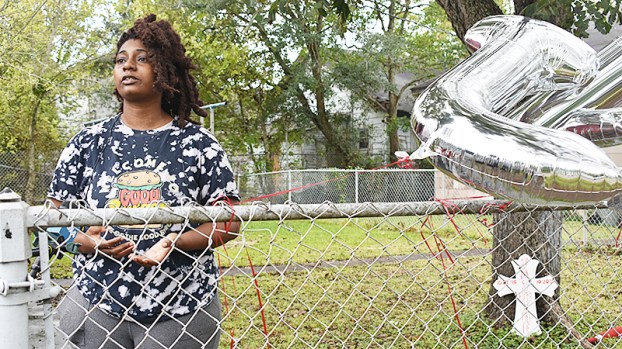 Roneshia Collins stands along Vicksburg Avenue in Port Arthur Tuesday afternoon, the site where her friend, Jasmine Newman, was shot and killed a year earlier. Police and family are bringing awareness to the case in hopes of generating tips from the public.

Standing outside of a home in the 1100 block of Vicksburg Avenue, Roneshia Collins recalled the night her best friend Jasmine Newman was shot to death during an ambush style shooting one year ago.

Collins and other friends had gathered there listening to music just as any other 20-somethings would do.

As the group dispersed around 2:30 a.m., shots rang out from a dark alley across the street from where they were.

The women ducked next to each other, and Collins was shot three times in the leg. She didn’t even know she had been hit until she ran to the house.

She thought Newman was behind her. She wasn’t.

Then Collins saw Newman and screamed — her friend had been hit multiple times and was dead.

A total of four people were hit by gunfire; Newman was the only fatality.

Port Arthur Police Det. Mike Hebert said none of the people at the party had any criminal affiliations.

And police have never received any information on the case that could lead to an arrest.

“We heard rumors, but rumors don’t help us,” Hebert said. “We need someone to come forward.”

Detectives believe this was not the first time the gunman or gunmen committed this type of crime.

“To shoot four people, I would say our suspects have done this before and that’s the real tragedy of it,” Hebert said.

The shooting spree likely took only five seconds, he said. 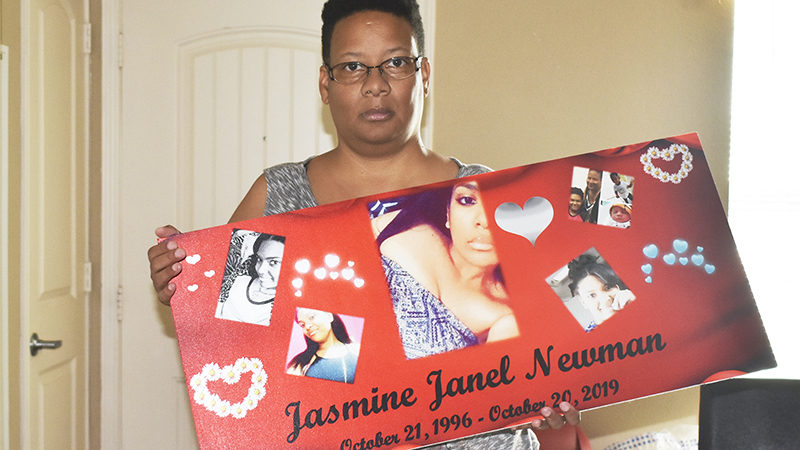 Jermel Newman holds a poster with photos of her daughter, Jasmine Newman, who was shot to death Oct. 20, 2019. one day shy of her 23rd birthday. (Mary Meaux/The News)

Family and friends of Newman said it’s time for someone to speak up and solve her murder.

Crime Stoppers of Southeast Texas is offering a reward of up to $1,000 for information leading to an arrest — an amount that has been offered since the shooting last year. Hebert said there is a drive to add more money to the reward in hopes of solving the case.

Collins created a cross with Jasmine’s name, birth and death dates and tied four balloons that spelled “Jass” to a fence outside the Vicksburg Avenue home. A nearby building still has a bullet hole in a window and one just above that.

“Today is emotional for me,” Collins said. “She was my best friend, my protector, she was God to me. I just want justice for my friend. I’m trying to stay positive through it all, but my heart is broke.”

When thinking of that night she gets flashbacks and knows she can’t call or text her friend anymore.

She also lives every day in fear.

“Every time I come out or go to my car, I look to the alley and think ‘Who would do something like that?’ I want justice for my friend,” Collins said.

Jasmine’s mother Jermal, along with Jasmine’s two small children, showed up to the site Tuesday and were joined by the children’s father, paternal grandmother Diane Dennis, Ronald Newman and the Rev. Robert Johnson of First Baptist Church Sabine Pass.

The pastor gathered the group in a circle, where he offered prayers and a hymn, which led to Jermal overcoming with grief for the loss of her only child.

Jermal Newman brought along a small vase with white flowers that she placed near a telephone pole — she wasn’t able to place the vase at the exact site where her daughter died because it is in a driveway.

“I feel like it happened all over again,” the mother said. “It’s hard. It’s hard, I’m not gonna lie. I never would have thought in a million years this would happen.”

Jermal Newman said she is still grieving, still hurting and is not over the death of her child.

“It makes me mad,” she said. “She has friends who won’t speak up. You’ve been friends with my daughter all these years.”

Jermal Newman said she is not going to let this drop. She wants justice for Jasmine.

If you have information on this crime, call the Port Arthur Police Department at 983-8600 or Crime Stoppers of Southeast Texas at 409-833-TIPS. You won’t be asked your name and may be eligible for a cash reward. An anonymous tip can also be sent by downloading the P3 Tips app on a smartphone. 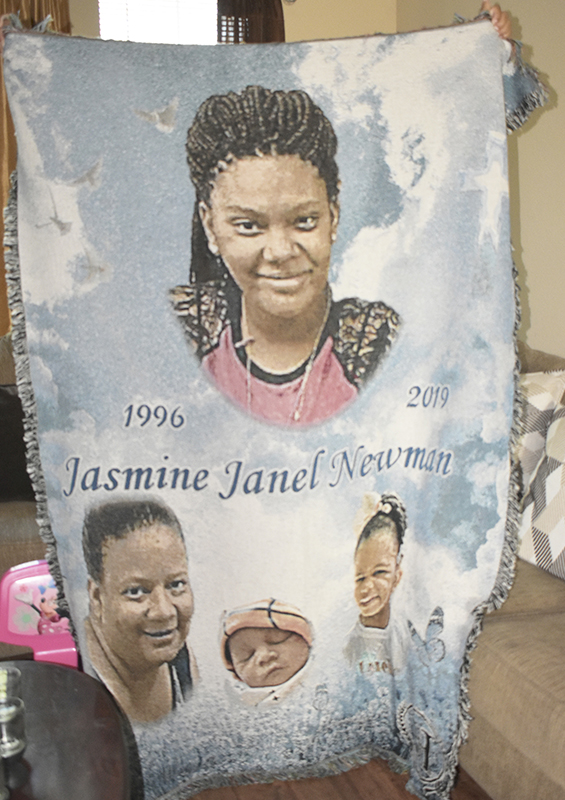 Jermel Newman holds a blanket that has photos of her, her grandchildren and her daughter, Jasmine, who was shot to death ambush-style while at a party.

Jasmine Newman is gone, but police and family are working to ensure she is not forgotten. The young Port Arthur... read more