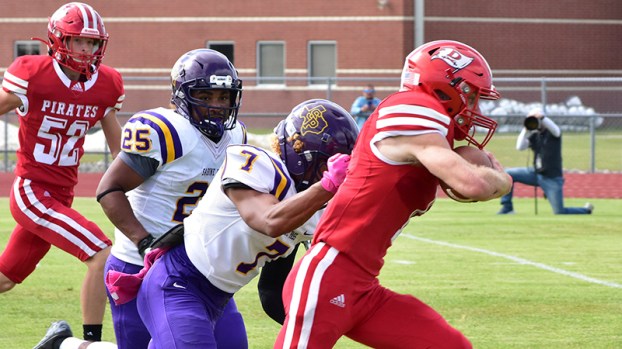 Deweyville running back Cade Watson heads toward the end zone as Sabine Pass’ Grayson Johnson (25) and Jeann Zuniga (7) try to bring him down Saturday in Deweyville. (I.C. Murrell/The News) 10-17-20

DEWEYVILLE — Sabine Pass had to make a five-day turnaround after a Monday afternoon loss to Burkeville, and in that time, the Sharks returned to practice Wednesday and resumed class Thursday, when electricity knocked out due to Hurricane Delta was restored.

The Sharks played just their second game of the season Saturday at Deweyville, but the Pirates scored on six of eight drives on their way to a 43-0 victory in District 12-2A Division II battle.

Berry turned in a 48-yard touchdown run midway through the first quarter. 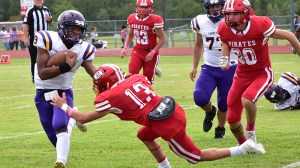 The Pirates scored a safety on the Pirates’ drive following Berry’s big run, when a fourth-down snap rolled out of the end zone.

Deweyville quarterback James Menard accounted for two second-half touchdowns. Menard took a bad snap and dodged a tackle in the backfield before scampering 15 yards for a score early in the third quarter. He then rushed from 2 yards out for the game’s final TD in the fourth.