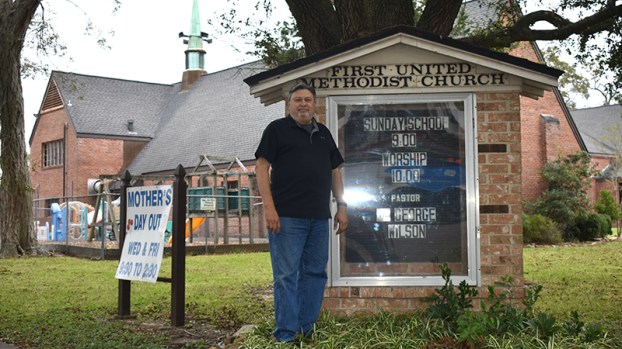 Doye Tomplait, a 40-year-member of First United Methodist Church of Groves, stands at the church at the corner of Washington Street and Cleveland Avenue. The speakers for the church bells can be seen on the steeple behind him. (Mary Meaux/The News)

GROVES — Doye Tomplait has fond memories of riding his bike on hot summer days and stopping for a drink of cold water at the water fountain outside First United Methodist Church in Groves.

The cold water from that fountain tasted better than any water from a garden hose.

He remembers enjoying the bells and chimes ringing from the church growing up and into adulthood — and always enjoyed hearing them. He and his soon-to-be wife were of different denominations, neither were Methodist. And neither wanted to upset their families when it came time to wed.

That’s when Tomplait remembered the church bells, he said. The couple visited the church and fell in love with the people there and have been members ever since, for about 40 years. 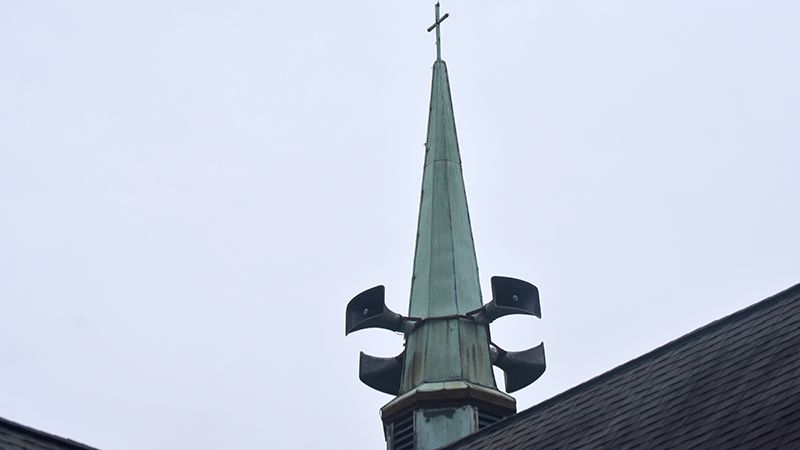 First United Methodist Church in Groves has been around for approximately 80 years and is located at 6501 Washington St.

Back before the bells and chimes rang out via computer, as they do now, the sounds came from an old record player on a timer, he said.

The bells go off four times a day, chiming the time at 9 a.m., noon, 3 p.m. and 6 p.m. Afterward a hymn is played. Tomplait hasn’t officially timed the hymns for duration, but Groves City Manager D.E. Sosa said the hymn around noon is four to five minutes long, the others shorter.

On Aug. 18 a man whose name has not been released that lives near the church made a complaint with the municipal court but did not sign the complaint that day, City marshal Norman Reynolds Jr. said.

Police then went and spoke with representatives of the church and neighbors.

Shortly after making the complaint, the man determined the church was not going to turn off the bells and went back to the court and signed the complaint of a noise ordinance violation, Reynolds said.

The city marshal said he enjoys the bells and feels it is time for the city council to revisit the ordinance and consider an exemption for churches.

Sosa explained the city’s ordinance is for raucous noise and he does not believe the church bells fit the category of a nuisance.

“They don’t come on at a time when it is most sensitive, night time, and it doesn’t last log,” Sosa said. “All the Groves Police Department is doing is serving the church with a summons.”

The summons tells the church “the prosecuting attorney will discuss this and they need to be at the court to answer any questions the judge may have.”

“All the police department did was send out the notice of summons,” he said.

The computerized device that creates the church bell sounds and chimes at First United Methodist Church of Groves.

A hearing is set for 1:30 p.m. Wednesday at Groves Municipal Court at which time the church will enter a plea. Tomplait said they plan to enter a “not guilty” plea.

And during all of this the church was reportedly contacted by an area attorney, Jonathan Juhon , who has agreed to represent the church and volunteered his time at no cost.

“It’s unbelievable and we’re very thankful,” Tomplait said. “So few people out there step up when people need help.”

If found guilty to the misdemeanor crime the church would could be fined a maximum of $500.

But that is not the point, he said.

“It’s not about the money part of it, it’s the fact that if we lose, this would set a precedence,” he said. “There are wonderful churches in Groves that play bells at times. If we would lose and they would play their bells, it would then become a violation. Would a church purposely violate the law? If we lost, it’s not about the money but saving the church bells in Groves. We don’t want to lose this case. It’s about something bigger than us. We never considered it as just us, the Methodist. We consider all of Groves. If we lose the case, all of Groves loses the right to ring their bells.”

Tomplait said Nederland and Port Arthur have exemptions to their city ordinances regarding church bells. He hopes the city of Groves will do the same.

“We have full confidence in city council in revising the noise ordinance to exempt church bells,” he said.

Tomplait said he understands the unnamed man who made the complaint has every right to do so.

Sosa is aware of the social media interest in the issue but at this time it is not up to the city or even the judge.

“If one person or 1,000 show up, it’s not going to change the outcome of what the prosecuting attorney questions,” Sosa said.

The municipal judge, he said, does not have much to do with the case at this early point; it’s whether the prosecution decides to go further and in Sosa’s personal opinion, he doesn’t think there’s a case. 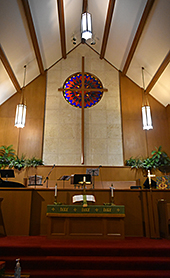 A look inside the church, which features a “rose window” behind the crucifix.