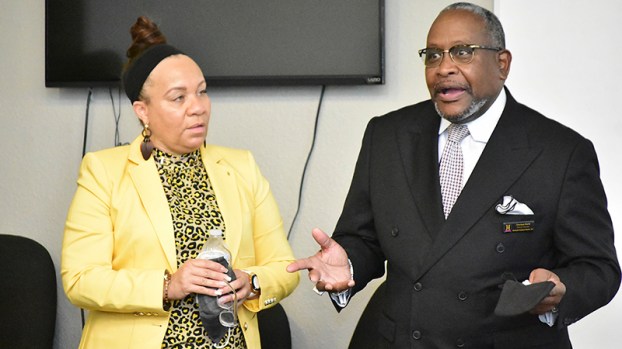 The list of engineering and construction procurement opportunities is growing in Port Arthur, and Port Arthur Transit invited engineers — some of whom grew up in the city — to learn about ongoing and upcoming projects.

“My goal is two-fold: First of all, I’m a professional engineer, so I’m just passionate about design, building and making things better,” said Kelvin Solco, a Beaumont aviation planner and engineer who graduated from Stephen F. Austin High School.

“Also, I’m from this area. So, it’s my goal and my passion to come back and make this city better, more productive and help the economic production of the city.”

Approximately 10 engineers heard from officials with Port Arthur Transit, Port Arthur Public Works and the Port of Port Arthur about projects within their entities ranging from capital improvements to expansion over breakfast from Chick-fil-A.

The idea was a brainchild of PAT Director Ivan Mitchell and planner Stacy Tezino-Castilow, whose transit system is also undergoing multi-million dollar improvements such as construction of a new maintenance building and upgrades to its terminal.

Solco said he would start with the city’s projects to find his procurement opportunities.

“When I look at the city procurement opportunities, my goal is to help them with whatever the challenges are in the engineering office,” Solco said. “That’s what I heard today. That’s where I’m going to start.”

For Houston landscaping consultant Deborah Coleman Hutchison, learning about the city’s needs is a way to help her childhood home in its revitalization endeavors.

“Over the years, I’ve watched the city of Port Arthur change the landscape of the city, and I’ve often visited here with family,” said Hutchison, who graduated from Lincoln High School in 1979, the same year Solco finished at SFA. “I’ve seen changes with the mayor and the city board. I think Mayor [Thurman] Bartie is doing a fabulous job of bringing in not just the people here, but he’s also reaching out. I’m happy to see a lot of people from Port Arthur who are coming back and helping the city revitalize.

“That’s important because that allows me to see a lot of the diversity they’re making up here to include a lot of us. I’m excited. It’s a lot of work to be done, but again, growing up in an oil town with an oil and gas industry, it’s good to see there’s other things coming along like the port.”

The Port of Port Arthur boasts about $132 million of construction projects with 1,600 linear feet to build, according to engineering director Ed Long.

With new docks coming to the port, additional backlands for cargo need to be developed and local labor is needed to move the cargo, Long said. The port is also adding a rail track, so workers to stabilize and pave the area are needed as well.

The port is revitalizing a portion of town by purchasing and restoring “a couple” of buildings and attracting companies to work out of them and bring labor into the city’s navigation district.

“The port is working well with the city of Port Arthur,” Long said.

The July fire that damaged some of Grammier-Oberle Funeral Home causing some services to be moved has been deemed arson,... read more