Under pressure: Quarterbacks have to worry about more than one Thomas 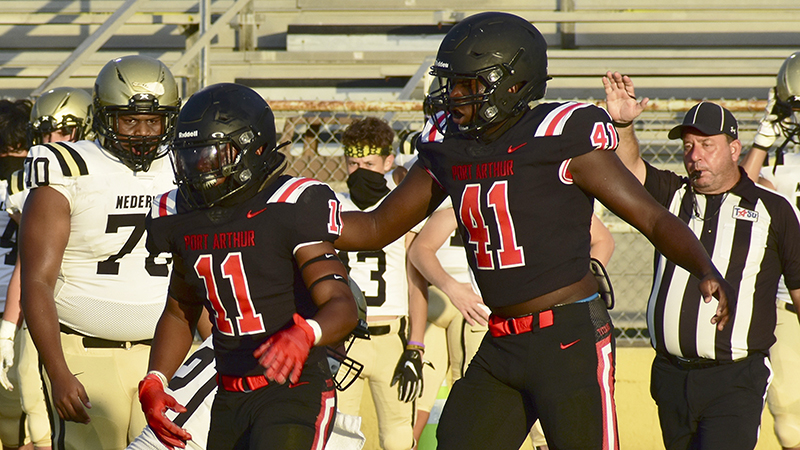 Christian Thomas (41) took over as a starter for Texas commit Jordon Thomas in 2019 and now lines up on the opposite end of Thomas on Memorial’s defensive line. (I.C. Murrell/The News) 9-17-20

When Memorial defensive end Jordon Thomas went down with a season-ending injury last year, head coach Brian Morgan made the call to start, then-sophomore Christian Thomas in his place.

This year, the Titans are reaping the benefits of having the University of Texas commit back from injury and Christian Thomas to reap havoc in opposing backfields.

“Last year, he was forced by the injury to play,” Morgan said of Christian Thomas. “I would’ve liked to bring him along last year, but that wasn’t the case. Now, he’s played a lot of football. He’s a really good and disruptive player.”

The 6-foot-1, 215-pound junior defensive end said the move forced him to learn the game faster.

“I had to develop faster than most players,” he said.

Christian Thomas wasn’t shy talking about his admiration for his senior lineman. He said he looks at 6-3, 245-pound Jordon Thomas as someone to model his game after.

While the two players aren’t related, Morgan said he sees similarities in their games.

“He is a good compliment to go with Jordan,” Morgan said. “They can really play off each other. You can’t run away from one side, because you will run into the other. He is a similar size to Jordon. He is super-athletic and has a lot of fast twitch. He is a really good football player.”

The Memorial defense had its best outing of the season last week as it torched La Porte 26-3. The dominant defense forced four turnovers and held La Porte’s offense to 83 total yards, including two defensive touchdowns.

Christian said the defense playing some of its best football.

“It’s very important for us to bring energy,” Christian Thomas said of the front seven. “If they see us grinding and working hard, they are going to take after us. I see our defense is very good and I believe our defense can take us to state.”

Morgan said Christian Thomas and Jordon Thomas compliment each other.

“Jordon uses more power, size and strength, while Christian is a little fast twitch,” Morgan said. “He has a lot of sacks already. He causes problems for the other quarterback for sure.”

Christian said the goal of making it to the state championship game is No. 1 for him, but he wouldn’t mind to increase some stats in the process.

“I want to get to 20 sacks for the season,” he said. “I want the team to have the same mindset as me. My mindset is execute, play hard, play fast, Titan Tempo and hopefully make it to state.”