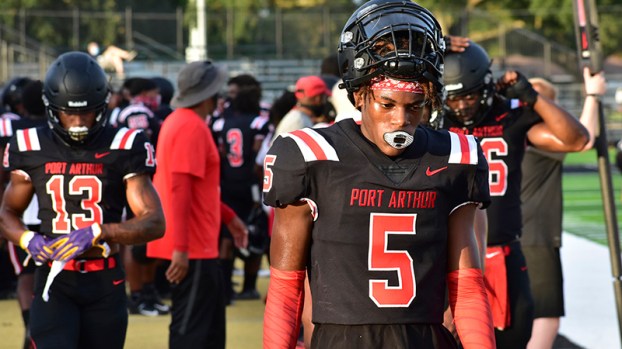 Memorial’s defense, including defensive backs Jaylon Guilbeau (13) and Maleek Jones (5) and defensive end Jordon Thomas (46), has come up big in the clutch and in a dominating performance against District 9-5A Division I favorite La Porte. (I.C. Murrell/The News) 9-17-20

Coming off their most complete victory of the season, the undefeated Port Arthur Memorial Titans will be the home team for the first time this year when they host the Goose Creek Memorial Patriots at Memorial Stadium.

Kickoff is slated for 7 p.m. Friday.

After the coronavirus pandemic changed its schedule, PA Memorial (3-0, 1-0) was forced to open the season with the road games against Port Neches-Groves, Barbers Hill and La Porte, respectively. The latter was the Titans’ first District 9-5A-I Division III contest.

On Friday, the lights will be on in Memorial Stadium.

“I guess we are kind of treating it like the PNG game,” Memorial head coach Brian Morgan said. “We still have to get on a bus and travel about as far. It’s nice to have our crowd. It’s been a while since we played at home.”

Morgan said Goose Creek (2-1, 1-0) is a senior-heavy team with plenty of athletes.

“We played against them last year, and they played really hard,” Morgan said. “They have a quarterback, who is super athletic. He is similar to Jah’mar [Sanders]. Just tackling that guy in space is going to be hard.”

“They see a guy like him in practice,” Morgan said. “It turns into option football. Somebody has to take the quarterback and somebody takes the running back. Some weeks it’s important. This week, it is magnified because if he gets in the open field, he can score.”

The Patriots are coming off a 34-7 win against Galveston Ball.

“I would like that to happen every week, but it is probably a lot tougher to do than it seems,” Morgan said, laughing. “They played really well. We pride ourselves in having a really good defense. They played well against a team that has a big ol’ line and a big running back. It was good to see. I thought going into it we matched up well, but you still have to go out and play.”

Morgan said his team has been able to bring their own energy to the road games, but looks forward to playing in front of the band.

“The home game will help with the energy,” he said. “In our group text, the kids were kind of joking about having about 20 people in the stands (last week), because it was Thursday night and people were anticipating bad weather. Their band was in the end zone, too, so we didn’t really hear them. It was a pretty dead game. It was close to practice.”

“My thought process goes back to when Auburn and Oregon played in the national championship and Oregon was super explosive on offense,” he said. “That was nullified, because the defensive line was just that talented for Auburn. It doesn’t really matter how good the other players are on offense if you can’t block the other team. That is what we try to do.”

With the game already in hand midway through the second half in Nederland’s 42-20 win over Jacksonville, running back Josh... read more