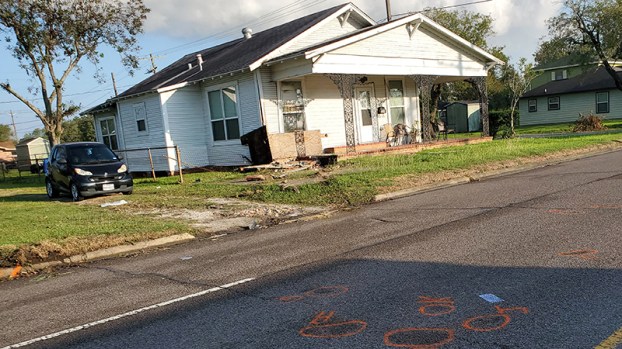 A pedestrian was struck by a vehicle that crashed into a home in the 1800 block of Gulfway Drive after which a second vehicle struck the victim in the roadway and fled on Wednesday. The pedestrian died from his injuries. (Mary Meaux/The News)

Neon orange spray paint still marked spots of the roadway in the 1800 block of Gulfway Drive on Thursday morning, about 12 hours after a pedestrian was struck and killed.

The marks are just feet from where tire tracks climbed a low curb and dug into the soil of a yard leading to a damaged section of a white clapboard home.

The identity of the deceased, described by police only as a Black male, were not released on Thursday.

Port Arthur Police were called to the scene at 9:29 p.m. Wednesday after a pedestrian was struck and a vehicle ran into a house, Field Operations Division Sgt. Timothy Dinger said in a release.

The victim was located in the roadway, and EMS and fire personnel performed life-saving efforts, but they were unsuccessful and the victim died from injuries sustained in the crash.

While the victim was in the roadway, a second vehicle struck the victim and fled the scene, Dinger said.

According to police, this is an ongoing investigation and the names of the individuals involved are not being released.

Police were unable to answer a number of questions on Thursday; it is unknown is the driver of the first vehicle was injured in the crash or if he or she was issued a citation. A description of the vehicle that fled the scene was not available.