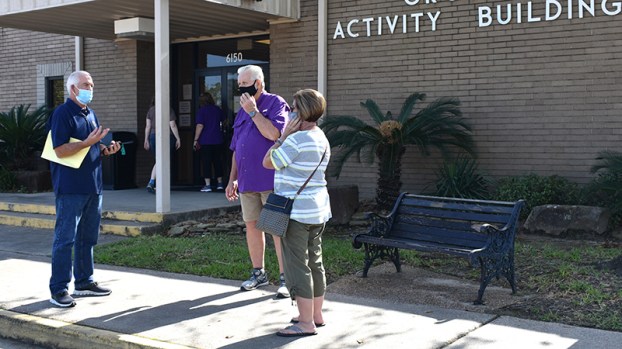 “I want to express my right” – check out local ballot, locations, times for early voting

GROVES — Local voters have a plethora of decisions to make, from the local and state races to the federal level.

A group of folks stopped by the Groves Activity Building for the second day of early voting on Wednesday and briefly discussed their reasons for going to the polls.

“I am voting because it is my right and I want to express my right, and it’s my duty to vote,” Rose LeJeune said. “I am not for defunding police, not for abortion or anything like that.”

Lurlan LeJeune added to the conversation, saying if he has gripes about something, he comes to vote.

Kathy Brau said she was at the polls to execute her rights. Sshe and Ricky Radley agreed it is better to beat the crowds by voting early than waiting for Election Day.

Day one of early voting was brisk across Jefferson County:

According to the Jefferson County elections Department there are 149,748 registered voters as of Wednesday.

The ballot situation in Port Arthur is different from that of previous years.

Due to COVID-19, the May election was postponed to November but instead of all of the races: general election, which includes the presidential election, state and county election, Jefferson County Drainage District No. 7, Port Arthur Independent School District trustee election, and Port Arthur city election including council seats and nine propositions all on one ballot, there are two ballots for Port Arthur voters.

One for the federal, state, PAISD and DD7 races and another for council and propositions.

County officials said the city did not meet the required guidelines of having an updated voter database — a problem a decade in the making.

Voters in Groves will decide on four separate seats for their city; mayor, Ward 2, Ward 4 and city marshal.

If Borne loses, he maintains his Ward 1 seat because his term is not up. If he wins the mayor’s race, someone will be appointed to complete his unexpired term.

Place 7 incumbent Jake Lefort is unopposed and will retain his seat.

The Place 3 incumbent John Davenport did not draw any opponents this time around and will keep his seat.

The Place 5 incumbent Julie Gauthier is not running for reelection. Terry Schwertner filed for the seat and has no opponents and will automaticity earn the seat.