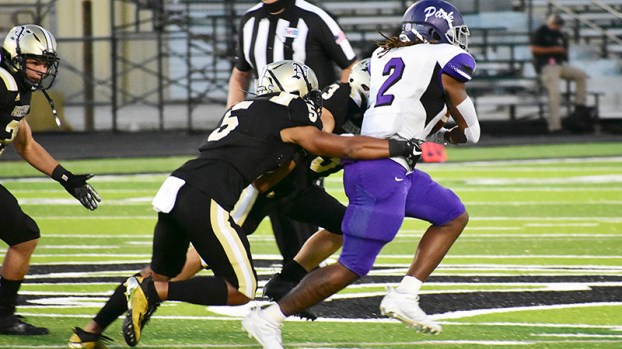 Kade Scott has adjusted to a new role on Nederland’s defense after a standout sophomore season as a running back. (I.C. Murrell/The News) 10-12-20

With the game already in hand midway through the second half in Nederland’s 42-20 win over Jacksonville, running back Josh Mazyck went up to running back-turned-linebacker Kade Scott with one request.

Mazyck told his friend he wanted a pick-six. Two plays later, Scott jumped an out route and took it 21 yards to the end zone.

“I was just watching the quarterback’s eyes.” Scott said of the play. “He was looking at the receiver the whole time, so I knew it was coming that way. I just went up and caught it. I was going to score. I wasn’t going to let him get me.”

The emergence of Mazyck as one of the district’s more productive running backs left Scott with fewer carries, head coach Monte Barrow said.

“You try to do what you can to get your best players on the field,” he said. “He’s worked some receiver. His physical stature and how he ran the ball, we hoped, would translate to the defensive side and be a physical player. He has and that was really what we hoped when we made the change.”

After the game, Barrow said he hoped the play solidified Scott’s move to the defensive side of the ball.

“I was happy for him,” Barrow said. “I hope it put a little justification to the move he has made. He really bought into it. It makes our defense different with him out there at that spot.”

During his first two seasons with the Bulldogs, Scott made his name off his bruising running style.

“I like hitting people,” he said. “I’m starting to like defense more because I can hit people.”

Barrow said Scott’s versatility has been a huge help for the Bulldogs.

“He’s an outside linebacker, but he also stacks up,” Barrow said. “He is in a position that sees a lot of action from both the run and the pass. He’s the type of athlete that can handle that.”

Scott said he played some safety during his freshman year, but had not played on that side of the ball at any other time.

“It took some getting used to,” he said. “I had to learn all of the plays and things like that.”

Barrow said having a defensive player that knows what to do with the ball once there is a forced turnover is icing on the cake.

“If he gets the ball, he knows what to do with it,” Barrow said. “He can be dangerous because he’s returning it against guys that aren’t defensive players.”

Barrow said the Bulldogs will continue to use Scott on offense in the back field and out wide. Scott said he wants to help in any way possible and just enjoys being on the field.

“I like the way I’m doing things and I like being able to help the team out,” Scott said.

SABINE PASS — With no power in the entire community due to damage from Hurricane Delta, the Sabine Pass Sharks... read more