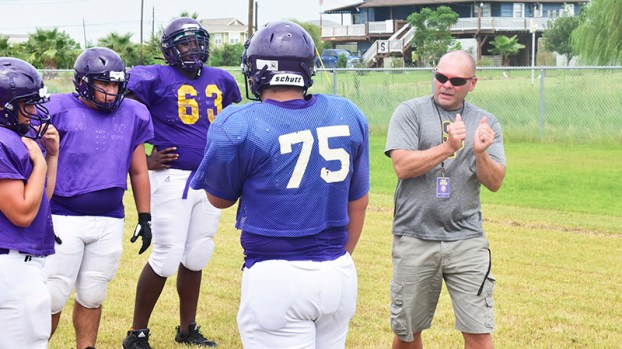 After about the seventh bad snap on what turned out to be a rough day for the Sabine Pass Sharks’ center, fans in the stands began to get restless.

Many called for the coach to change centers, while others openly pleaded from the stands to head coach Jason Thibodeaux to change the offense to mitigate the problem.

One fan went as far to say that the coach should be coaching elementary school as opposed to the high school level.

The Sharks lost the game 14-6 to Burkeville, and Sabine Pass has plenty of areas to clean up, from penalties to botched snaps.

The game was the first of the season for the Sharks, who missed all of the preseason due to low roster numbers.

Putting a team on the field to play a real district schedule was Thibodeaux’s main goal this year. He wanted his seniors, who had their sophomore season canceled after a slew of injuries, to play.

While the Sharks did not look sharp, they looked like a team that jumped into district play without any games to work out the kinks, and with only 16 players on the roster, they could not even simulate 11-on-11 football.

After the game, Thibodeaux owned up to the mistakes his team made, but he appeared to be relieved, as well.

“I told the guys we wanted a season, and that was our goal — to have a season,” Thibodeaux said. “We’re in it. Things didn’t work out the way we planned, but that’s life. You have to stare adversity in the face. What are you going to do?”

Playing football at the collegiate level is no guarantee. In fact, it is unlikely for the vast majority of high school athletes. At 2A Sabine Pass, the percentages are even bleaker. That does not mean that it is impossible, and this is in no way to discourage any young athletes from trying to achieve such goals.

The spotlight is on the coach and coaches that should put the athletes first. Of course winning is great, but making sure that young men and women take with them life lessons and do the necessary growing up is far more important.

That is what high school sports are supposed to do first and foremost.

Part of that philosophy will be to make sure the players clean up the mistakes, but the measurement of a successful season in Sabine Pass will not be by the numbers in the win-loss columns, but by the growth of the young men wearing the jerseys. Having players stick out daily practices for weeks with no guarantee that a football season was on the horizon was a great start.

“My main concern is the love of the kids and making sure they are learning football, discipline, teamwork and dedication,” Thibodeaux said. “If they take that on the field and apply that to being successful in life, then I have done my job.”

Chris Moore is Port Arthur Newsmedia sports editor. He can be reached at chris.moore@panews.com.

Pedro from Houston asks: My brother had a wreck on private property the other day and he didn’t call the... read more