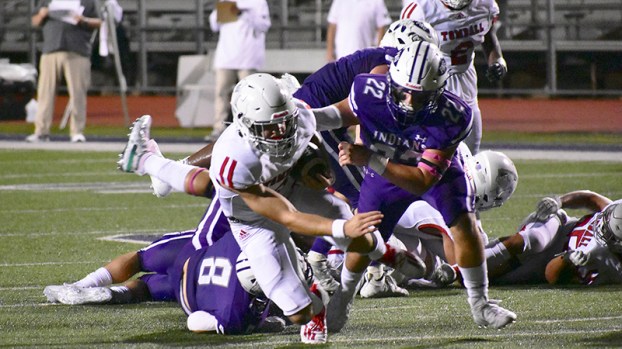 PORT NECHES — A tough third quarter against Tomball sent Port Neches-Groves into the bye with 30-27 loss and a 1-2 record Thursday night at The Reservation.

One bright spot for the Indians was their ability to put together a good first half on both sides of the ball, which led to a 17-10 lead at halftime.

“We had a lot better first half this week than we’ve had,” PNG head coach Brandon Faircloth said. “We changed some things in practice this week to put a focus on that. I’m very proud of our kids for getting out here and responding in the first quarter.”

The PNG defense continued to struggle against mobile quarterbacks, allowing Cougars signal caller Cale Hellums to gain 260 yards on 27 carries. The defense has allowed 707 yards on the ground to opposing quarterbacks through three games (235.67 yards per game).

“It was a great game,” Faircloth said. “It came down to the end, like all of our games have. I’m really proud of our defense. I give Tomball a lot of credit. That is a 6A school. They had a great game plan. We made some critical errors that cost us points in the second half.”

The game fell apart for PNG in the third quarter when Tomball scored 20 unanswered points.

“We made some errors on special teams that gave them the ball,” Faircloth said. “They made a good call on the onside kick. That was a really good kick and they got a good hop, as well. We fumbled one as well. If they go our way, it is a different ball game. It went their way tonight. They made some plays that they needed to.”

Faircloth said he believes the schedule of Memorial, United and Tomball has prepared his team for a rigorous District 12-5A Division II slate.

Senior quarterback Blake Bost completed 18-of-35 of his passes for 241 yards. The passing game struggled to find a rhythm between drops and inaccurate passes. Faircloth attributed the inaccuracies to gusting winds from the incoming Hurricane Delta.

“It was a little windy down on the field, no doubt about it,” he said. “We practice in it every day. Some nights it goes that way. We have to go back to work and continue to get better.”

Even with the bye week, Faircloth said the team would go through their normal practices.

“We’ll look at the film and see where we have to get better,” he said. “We’ll get ready for district. Everyone’s record is 0-0 at this point. Our goal is to make the playoffs. We are going to focus really hard on these next seven games and figure out a way to get in the playoffs this year.”

The Sabine Pass Sharks are retooling after an injury will cause a junior to miss the rest of the season,... read more