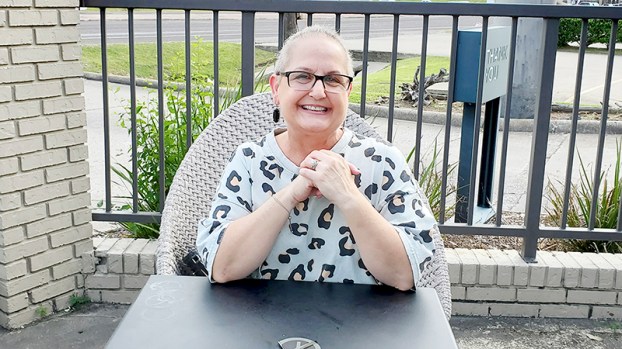 Dodie Harrington’s smile and positive attitude are contagious, and other than the sprouting of mostly grey hair, one wouldn’t know she is battling metastatic breast cancer.

While the Mid-County woman’s cancer journey began when she was diagnosed “the first time” in January 2011, she hasn’t stopped. She relies on her faith, along with support from family and friends, and lives her life just as anyone else does.

Two months after the January 2011 diagnosis of lobular breast cancer came a double mastectomy. Chemotherapy treatments began in April and went until October, with reconstructive surgery in December.

She was cancer free for five years, during which time she was on maintenance chemo, as she called it, which was typical at that time.

“In May 2016, and this is probably irrelevant, but I started having a pain in my hip and thought it was sciatic nerve issues,” she recalls. “I was going for my five-year checkup at MD Anderson, they do a pelvic (exam) and MRI, and they ended up finding I had four spots in my spine — one in the rib, one on the hip and one on the liver.” 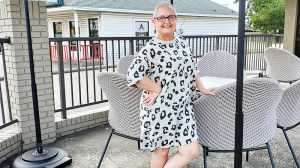 The typical five-year cancer-free status went out the door and in came the diagnosis of metastatic breast cancer, or METS. At that time MD Anderson didn’t want to touch her liver.

A friend of hers was going to Arlington Cancer Center near Dallas for treatment and convinced Harrington to go. Soon she was with her friend’s physician, Dr. Karel Dicke.

To be near the cancer center, she moved into an apartment in Arlington for 18 months.

In or around July 2017, doctors thought they saw something else on a scan and went in to check it out. It was scar tissue.

About a year later the same thing happened.

Arlington Cancer Center was bought out by Texas Oncology, which allowed Harrington to get treatment closer to home. She now goes to Kemah and Arlington both once a month but due to COVID-19, she hasn’t traveled to the Arlington area.

Besides the cancer battle, she also had to have her gallbladder taken out due to gallstones.

“All kinds of good stuff,” she said with a laugh.

“I had a PET (Positron Emission Tomography) scan in late August, my tumor markers are rising and they found disease on my spine and my hip, so I’m on an oral chemo. They took me of the intravenous chemo,” she said. “They (doctors) are claiming it’s going to do its job and get rid of it. I got rid of it before and I’ll get rid of it again.

When she was first diagnosed, her daughters were 13 and 17. She has continued to work during all of this while raising her children.

Asked what motivates her and keeps her going, she answered quickly:

“My faith in Jesus and believing I’m healed,” Harrington said. “I believe it. I have a favorite scripture that I stand on everyday. Mark 11:24, ‘Therefore whatever you ask for in prayer, if you believe it you receive it and it’s yours and done’ and He doesn’t go back on His promises,” she said.

Working during her cancer journey has helped. It keeps her with friends and co-workers and best friend Bonita Segura.

Segura is a 15-year cancer survivor.

“Dodie doesn’t allow obstacles or setbacks to weaken her faith, which is a strong key to survival,” Segura said.

Harrington said it is important for cancer survivors to talk to someone who has been through that journey.

“It’s very important because that’s what gets you through,“ she said. “When you talk to somebody who has been though the same thing as you, just to tell you a good story, but she can also tell me, ‘you know what, you’re going to have setbacks, so just get ready for them. That doesn’t stop you from being healed.’ You’re going to have these setbacks but that’s just part of the journey.”

“She exhibits grace and love, but most importantly, she loves our God with her whole heart,” Hebert said. “She is a friend to all and always has the most beautiful smile on her face.”

Harrington’s bright smile and positive outlook are signs of her motivators. She said she probably wouldn’t be here if she didn’t have a positive attitude.

“I think attitude plays a big part of it too and my doctor told me, your attitude is probably 80 percent of our survival,” she said.

Both of Harrington’s daughters are in the nursing field. The oldest is an RN. The youngest is set to graduate as a Registered Nurse on Dec. 12.

“I don’t know if what I have gone through during my journey may have inspired them towards nursing and their professions and due to their knowledge in nursing it has helped them deal with my journey,” she said. “Surviving to witness them graduate from college and get married is my greatest blessing with many more to come.”

Harrington is part of a group of friends who’ve known each other since elementary school, they call themselves the Lucky 7, though there are eight including Harrington. And of the eight, three have had breast cancer.

“Talk about it and let it be known because it’s nothing to be ashamed of,” she said. “It is what it is. Life happens. The way you get through your journey is by talking about it and talking with other people that have gone through it, and first and foremost, is to have a relationship with Jesus.”

Without her faith she would likely not be in a good place emotionally, Harrington says. Not a day goes by that cancer is not on her mind but she doesn’t dwell on it.

“I don’t stay there very long because it can bring you down, but I’m human and I’m going to have those thoughts,” she said. “I just get on with it. Satan, get behind me, you’re not going to get me down.”

The diagnosis of metastatic breast cancer comes with the label of being incurable, but it is manageable.

“But with my faith and the way I believe, that our God is a miracle working God and He performed miracles before and He can still do it today and I believe I’m one of those people,” she said. “That’s all I can say.”

Titans turn up defensive heat, improve to 3-0 on season