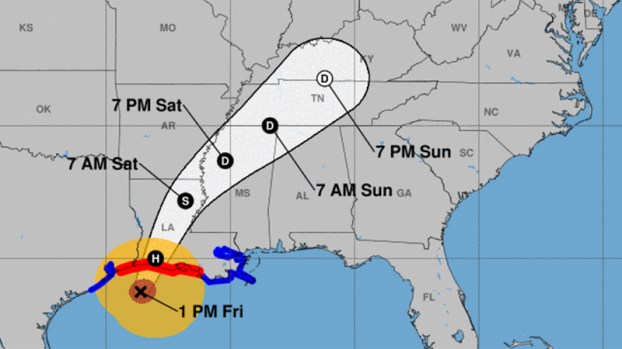 Hurricane Delta, as of 1 p.m. Friday, is still on track to hit eastern Cameron Parish late this afternoon or early evening as a category 2 hurricane.

According to the National Weather Service, the storm was 85 miles from Port Arthur as of 1 p.m. Friday.

Rain has been steady across southeast Texas and western Louisiana, where one to three inches of rain has fallen already. Be prepared for flash flooding this afternoon in the heaviest rains, Warning Coordination Meteorologist Roger Erickson said.

As Hurricane Delta approaches the Texas-Louisiana Coast, residents in Southeast Texas should prepare for the possible closure of the Rainbow and Veterans Bridges, which connect Port Arthur to Bridge City.

Winds are increasing — a gust of 60 mph was recorded at the airport in Lake Charles.

Winds close to 40 mph have been recorded so far in Mid-County.

Power outages are starting to occur across southeast Texas and southwest Louisiana.

Hurricane force winds are expected to move onshore this afternoon and spread inland this evening.

Tides are still rising, despite astronomical tides saying they should be falling. That is due to the storm surge as the hurricane approaches the coast.