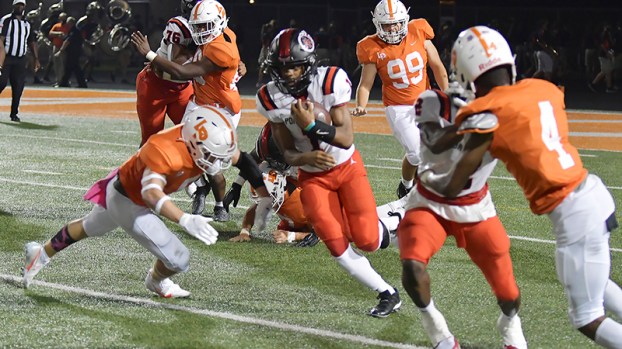 Titans turn up defensive heat, improve to 3-0 on season

The reason for that pride was obvious to everyone at Bulldog Stadium on Thursday night as the Titans stifled the host La Porte Bulldogs 26-3 in the District 9-5A Division I opener for both squads.

The Memorial defense not only limited La Porte to a first-quarter field goal; the defenders also scored two touchdowns and set up another with a blocked punt. 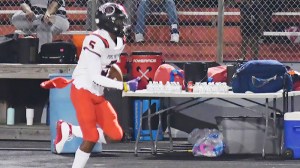 Maleek Jones of Memorial returns a fumble 66 yards for a touchdown Thursday in La Porte. (Jereem Augustine/Special to The News) 10-8-20

“There aren’t a lot of teams that play defense anymore,” Morgan said. “I challenge these guys, and they stepped up to that challenge. La Porte is a solid football team, and we just shut them down.”

Memorial allowed just 67 total yards by the Bulldogs, and won the turnover battle 4-0 as the Titans improved to 3-0 on the season. Memorial recovered three fumbles and also had an interception on the evening.

“We’ve had three tough road wins to start the year,” Morgan said. “This was a challenging start for the season, but I think these games made us better.”

The Titans never trailed in the game, taking the lead on the opening drive as quarterback Jah’mar Sanders scored on a 4-yard run just 4:43 into the game. The PAT failed, leaving the score at 6-0.

La Porte (2-1) answered with a 40-yard field goal by Levi Hilborn with 2:23 remaining in the opening quarter, but that is all the offense the Bulldogs mustered on the night.

Memorial made it 12-3 before the quarter ended when Maleek Jones scampered 66 yards down the left sideline for a TD after scooping up a La Porte fumble. There was no scoring in the second quarter, as the Titans carried a 12-3 lead into halftime.

That’s the way the score stood until 3:54 remained in the third quarter, when Memorial boosted its lead to 18-3 as Sanders tossed a 9-yard scoring pass to Tony Brooks one play after Jordan Thomas blocked Hilborn’s punt.

The Titans closed out the scoring with their second defensive touchdown of the contest as linebacker Darrell Thornton recovered a fumble in the La Porte end zone with 5:55 left in the fourth quarter. Sanders hit Branden Chaney for the two-point conversion.

After La Porte turned the ball over on downs, the Memorial offense ran the final 4:32 of the clock.

Memorial had 274 yards of total offense, 197 of those on the ground. Sanders rushed for 82 yards and passed for 87.

Jones scored on the 66-yard fumble return to make it 12-3. La Porte was in position to tie the game or take the lead when Jones scored the momentum-changing TD.

Jones and Darrell Thornton for their defensive TDs.

The Titans were penalized 10 times for 75 yards. La Porte was penalized three times for 25 yards.