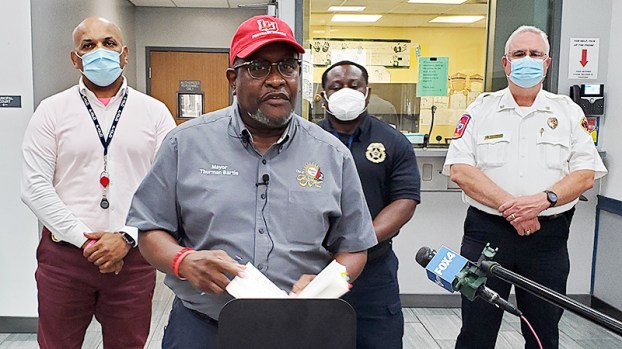 The hurricane, a category 2 at around 5 p.m., was about 345 miles from Port Arthur. It is expected to move into eastern Cameron Parish on Friday afternoon.

Port Arthur is not in the extreme danger zone as the western side of a hurricane is typically the cleaner side.

“We are hoping it remains a 2 but it may be upgraded to a cat 3,” Bartie said from the lobby of the Port Arthur police station.

By Friday morning Bartie expects the city to begin experiencing some tropical force strength winds and possibly a storm surge of 2 to 4 feet.

Rainfall is forecast to be from 4 to 6 inches, but often that number is doubled during the storm, he said.

“The eastern side, you’re going to have some of the very strong winds and surge,” Bartie said. “We actually pray for our brothers and sisters in Louisiana and maybe some parts of Mississippi.”

Once the storm makes landfall in nearby Louisiana, it is expected to move at 12 to 14 mph, meaning southeast Texans could see a 3- to 4-hour time period of experiencing the storm.

His advice; be vigilant and respectful of the hurricane.

Sabine Pass and Pleasure Island are under a voluntary evacuation and some residents in Sabine Pass, Bartie said, had heeded the word.

Other advice is to be prepared for possible downed trees and maybe some power outages.

“And again, if you operate a generator please have the generator not in the home or anywhere near by – 30 feet from you doors,” he said. “Don’t have it inside with you, that can bring on some unhealthy situations and even death.”

Earlier Thursday, Bartie issued a declaration of local disaster in response to the approaching Hurricane Delta.

City of Nederland officials said they encourage everyone to secure and prepare the exterior of their homes; this includes bringing in garbage can(s), securing patio furniture, outdoor play structures or amenities, etc.

No mandatory or voluntary evacuation has been ordered for Nederland. City offices will maintain existing operations; however due to the wind forecast, people are encouraged to avoid any unnecessary travel.

PORT NECHES — A local family left their Port Neches home for the wilderness in a three-day race, hiking across... read more