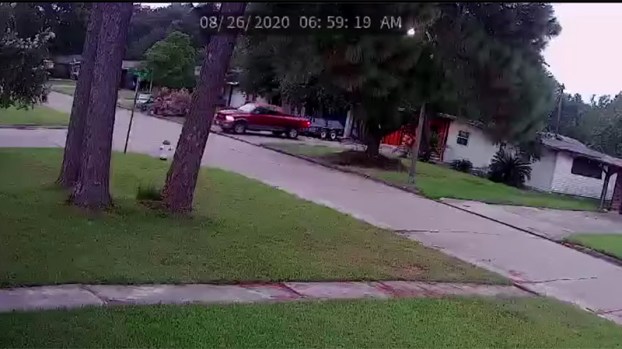 Pictured is a screenshot of video released by police of a reported trailer theft.

A brazen daytime trailer theft complete with a clearly visible red truck backing into a driveway and leaving with the trailer was caught on security camera footage in Port Arthur.

And now police are asking the public’s help in locating the thief.

In a video released Wednesday afternoon, a red Dodge pickup truck backs into a driveway and pulls a trailer away.

The street where the reported crime took place was not made public, but Det. Sadie Guedry said the crime occurred on the city’s east side.

A release from PAPD states the crime took place at approximately 7 a.m. Aug. 26.

The suspect vehicle is a four-door, dark red over grey Dodge truck.

Callers can remain anonymous by calling Crime Stoppers of SETX at 409-833-TIPS (8477). You will not be asked your name and may be eligible for a cash reward.