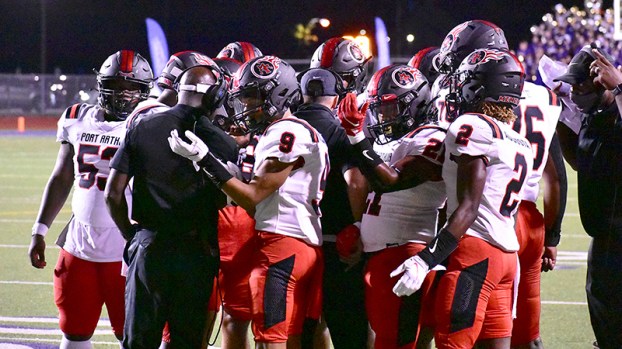 The Memorial Titans and La Porte Bulldogs agreed to move their game up to 7 p.m. Thursday in La Porte due to the potential for inclement weather from Hurricane Delta, Titans head coach Brian Morgan said.

The District 9-5A Division I game between the two undefeated teams was originally scheduled for Friday.

Both coaches, he said, discussed the possibility of playing the game Saturday, but decided to use that as a backup plan if the weather would be too bad Thursday night.

Morgan said he was not concerned about losing a day of practice.

“I don’t think it matters a whole lot,” he said. “These kids recover fast. They are probably good to play a game today. If at some point you are banged up in the season, it may make a difference. At this point, we are pretty healthy.”

The Memorial coach said his team was fortunate to play Port Neches-Groves and Barbers Hill to prepare for district.

“Both of those teams are really good and will probably make some noise in playoffs this year,” Morgan said. “I feel good about the team. I feel like it was good to see us have to battle and win two games where we were down in the fourth quarter. I thought that was huge.”

“They are a heavy senior team, which is good for them,” he said. “On defense, they play well and play hard. Offensively, they are going to run the ball. They have a big ole running back and a big offensive line. It is going to be a good test for us to start district for sure.”

The real battle for the Titans might be on the other side of the ball as La Porte’s defense has yet to allow a touchdown this year, beating Deer Park 17-6 and Clear Lake 27-3.

Morgan said his team has an identity that does not change too much based on the opponent.

“We are going to do what we do,” he said. “That is not going to change a whole lot week to week. Defensively, we have a veteran group that can handle that.”

Morgan also said that he prefers to play in clearer weather given that his team wants to throw the ball as opposed to La Porte, which will look to establish a ground attack.

Against Barbers Hill on Friday, Titan quarterback Jah’mar Sanders went 21-of-34 for 264 yards and touchdown. He also added 58 yards on 13 carries.

Memorial has averaged 32.5 points per game and approximately 400 yards of offense over the first two games.

Two local high school football teams will play their games Thursday due to the potential for inclement weather from Hurricane... read more