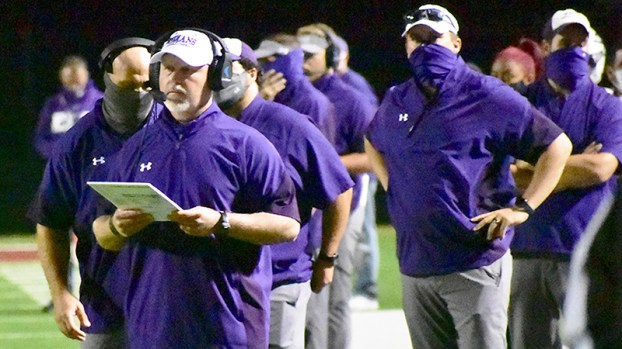 PNG head coach Brandon Faircloth, with notes, has a play radioed in during the first half against Beaumont United on Oct. 2. (I.C. Murrell/The News) 10-2-20

PNG ‘going to figure out’ cure for first-half woes

The potential for inclement weather from Hurricane Delta caused Port Neches-Groves and Tomball to move up their non-district matchup to 7:30 p.m. Thursday.

The game was originally slated for Friday night.

The game marks the final non-district game before PNG opens up District 12-5A Division II play against rival Nederland Oct. 23.

The Port Neches-Groves Indians are spending the week trying to figure out how to make the first half of their football games look like the second half. Through two games, PNG has been outscored 46-16 in the first half.

However, PNG (1-1) has been able to kick it up a notch and outscore opponents 56-29 in the second halves of games.

“We’re going to figure it out,” PNG head coach Brandon Faircloth said of the slow starts. “We’re going to change some things in practice this week to see if we can jump start the beginning of games and try to get going. It’s a mystery to a lot of us, but it’s something we are going to figure out. We have to make sure we are a full, four-quarter team like we have been in the past.”

Scrambling quarterbacks seem to be giving the PNG defense fits in the first half.

During the matchup against Memorial, Titans quarterback Jah’mar Sanders had 162 rushing yards on 10 carries at the halfway mark. Last week, the Indians defense gave up 118 yards on the ground to Beaumont United quarterback Bradley Thomas.

“It definitely shows how resilient we are,” Faircloth said. “It shows our grit and how we never give up. That is what I am proud of. With that comes the responsibility to play better at the beginning of games, too. I’m proud that they play hard for 48 minutes, because it has made a difference the last two games.”

PNG will likely have to get off to a fast start against the Cougars, who are averaging 38 points per game and 21 points in the first half.

Faircloth said comeback victories get the heart pumping, but he is hoping for a game that doesn’t require as much excitement.

“We love coming from behind, and it is exciting, but we have to play better in the first quarter,” he said.

The Indians might be able to jump out on the Cougars, who have also allowed 21 points in the first halves of their games against two opponents that have yet to win a game in Waller and Willis.

PNG quarterback Blake Bost is coming off a game where he completed 22-of-35 passes for 389 yards after struggling to get on the same page with his receivers in the season opener against Memorial.

Port Arthur investigators and medical experts have been unable to identify the body of a deceased individual found Friday afternoon... read more